Another first day of school for students – Coastal Observer

Another first day of school for students 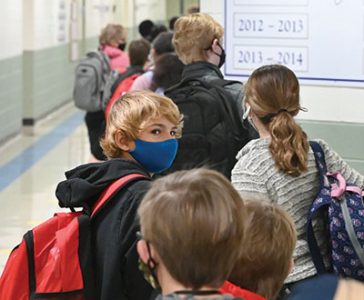 Students line up in the lobby at Waccamaw Intermediate on Monday morning.

Travis Klatka couldn’t see the smiles behind his students’ masks on Monday, but he knew they were there.

“You could see it in their eyes that they’re excited to see friends they may not have seen for awhile,” said Klatka, who is the principal at Waccamaw Intermediate School.

Monday was the first day of the district’s hybrid-plus phase, which has district students in kindergarten through fifth grade and sixth-graders at the intermediate school, back inside classrooms four days a week.

Superintendent Keith Price said it was like the first day of school all over again and he couldn’t tell who was more excited, the teachers or the staff.

“Parents were taking pictures, students were reunited with classmates from the other cohort, parents were crying tears of happiness and pride, car rider lines were backed up and some bus routes were delayed,” Price said. “It was wonderful. Normal problems. That little taste of normalcy was so fulfilling.”

The district had been in a hybrid phase, with students in two cohorts and in classrooms two days a week, since the middle of September. Bringing back a larger number of students together took a lot of planning, and a lot of plexiglass.

Klatka said classrooms are a little different, but it’s worth it.

“I think we have a good plan in place and we’re going to do everything we can to keep students and staff safe,” he added.

With intermediate school students arriving through several doors on Monday morning, staff was in place to direct traffic in the hallways and keep everybody separated. The school still has 104 students in virtual learning.

“You’ve got 300 kids that you’re trying to keep socially distanced as they arrive to school and as they leave school,” Klatka said. “That’s the biggest challenge, finding that extra space to space out.”

For those that were unsure about social distancing, the school painted alligator heads 6 feet apart on the walkways. The gator is the school mascot.

“Planning for that, we have to think outside the box and we’re making adjustments as needed,” Klatka said. “We have a plan in place but we also know we have to monitor and adjust it as needed.”

In Carol Burton’s fourth-grade class, 24 desks were equipped with plastic shields and students sat 3 feet apart. The only way they can get to their seats is through a center aisle that gives access to each row of desks.

It’s a challenge to hear the students sometimes, Burton said, since they also wear masks. But she said it was a challenge she was willing to work through to have her students back in the classroom.

Now that younger students are back in classrooms four days a week, the district is turning its attention to its older students.

Price told the school board this week that some of the challenges at middle schools and high schools are maintaining small class sizes and keeping students who change classes often in the same group all day.

“We’re trying to stick to the experts and the research on this and not drive by emotion, because we do want to keep everyone safe,” he added. “Everybody wants students back full-time, but we want to do it a safe way.”

Board Member Lynne Ford recognized the need for middle and high school students to be back in classrooms more days, but said the district could face some transportation issues.

“It’s not an easy thing, it’s a complex situation,” Ford said. “I do believe that the district is doing what it needs to do in terms of looking at it. We can’t move fast enough, but these issues are just so complex.”

Board Member Pat DeLeone said she wants to see a plan for expanding hybrid-plus to middle and high schools at the next board meeting on Feb. 16. She’s concerned about pass/fail rates for high school students for the first semester which ended last week.

“I have a feeling there’s a lot more that failed than I even anticipated,” DeLeone said.

The district has partnered with MUSC’s “Back to Business” program. MUSC representatives will tour three schools next week to provide feedback on safety protocols and discuss how to expand hybrid-plus to middle schools and high schools.