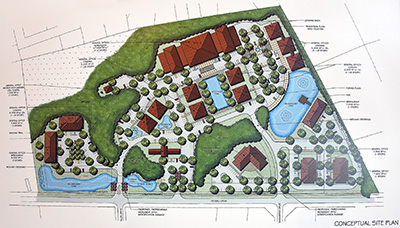 The 2015 concept plan for the technology park.

A citizens group that fought a zoning change to allow an apartment complex in Pawleys Island is now asking Georgetown County to make a change. Keep It Green wants 14.5 acres on Petigru Drive to revert from a technology park to a “forest and agriculture” zoning district.

The county owns 6.4 acres through its Economic Development Alliance. Mercom, which was initially the driver of the tech park plan, owns 7.4 acres.

The alliance proposed that the county sell the 6.4 acres to Graycliff Capital Partners for a 182-unit apartment complex. That required a change to the existing “planned development” zoning, which allows a mix of offices, retail and warehouse space. Keep It Green and area residents opposed the change, saying it would add to traffic and stormwater runoff and citing the goal of the county’s future land-use plan to limit the growth of residential development on Waccamaw Neck.

Graycliff withdrew its request when it appeared that it would not win approval from County Council.

Keep It Green wants the county to review the current zoning under a provision in its ordinance that requires work to start within two years after a planned development is approved. The tech park zoning was approved in 2015. In 2017, Mercom renovated a former landscape nursery on its property to use for offices. It was the first step toward a $6 million investment that the company planned before it ran into financial problems.

Keep It Green last week asked the Planning Commission to initiate a review of the zoning and start the reversion process. It sent the commission a petition with over 900 signatures that it obtained during the rezoning debate calling for the reversion.

Brian Tucker, the county director of Economic Development, had two meetings this week with companies that could use the 6.4 acres under its current zoning. He said he will continue to market the property, which the county bought with a $950,000 loan from Santee Cooper, until County Council changes its position on the tech park.

Cindy Person, a leader of Keep It Green, told the commission that the group has raised the issue with the planning staff.

“The Planning Department is apparently taking the position that there were ‘renovations’ to the existing Mercom building in 2017, and that this constitutes ‘construction’ of the rezoned Technology Park PD,” Person wrote. “We disagree.”

She called the work shown in county building permits “minor cosmetic repairs” that “neither fulfill the letter nor the spirit of the ordinance, and they certainly do not constitute construction.”

The ordinance mandates that the commission review planned developments that have not started construction within two years. “Unless presented cogent reasons to allow additional time,” the commission is required to start proceedings to revert the property either its “original classification or to such classification at the Planning Commission deems consistent with the Comprehensive Plan.”

Council Member Steve Goggans said the change to forest and agriculture is “silly.”

The future land-use plan shows the property as commercial.

“KIG submits that the zoning classification for this parcel that is most consistent with the objectives of the Comprehensive Plan is the FA zoning that this parcel held before the planned developments were approved,” Person said.

Holly Richardson, the county planning director, said she was reviewing the issue with the county attorney.