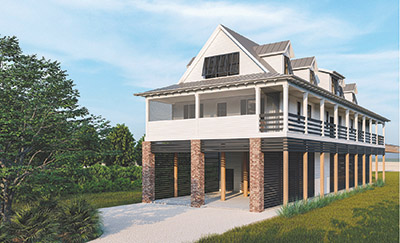 The ARB approved this design for a house at 132 Atlantic Ave.

It took less than 15 minutes for the Pawleys Island Architectural Review Board to approve its first set of plans. Paul Groce would not have minded if it had taken longer.

“We’re open to any suggestions,” he told the board. “My wife and I are so completely in support of the ARB.”

Town Council established the board and adopted a set of guidelines for new houses in June after a year of discussion with the town Planning Commission about ways to curtail “big box” structures.

Groce has been coming to the island since 1964. He said he and his wife, Jen, would have submitted their house plans to the town voluntarily if the ARB hadn’t been created.

The house at 132 Atlantic Ave. will replace one that dates from the 1920s. It has character, but isn’t historic, Groce said. Additions and alterations over the years left the house in what Ken Leach, who chairs the ARB, called the era of “avocado appliances,” referring to their color.

Groce told the board he would have preferred to keep the old structure, but the requirement that it be brought up to code if renovations exceed 50 percent of the value didn’t make that feasible.

He hired Whitney Newman, an architect who lives in Hagley, to design the new home. “I’m hoping that a year from now it will look like something that’s been there for 50 years,” Groce said.

Along with creating the ARB, the town amended its development ordinance to require that the second floor of a new home have no more than 80 percent of the living area of the first floor. The Groce house has 2,010 square feet on the first floor and 1,360 on the second.

The town requires a 6/12 roof pitch. The Groce house has a steeper 12/12 pitch on the main roof with a 4/12 pitch on the porch that wraps around three sides of the first floor.

“It’s pretty obvious it’s taking cues from other historic properties on the island,” Newman told the board. “Paul was aware of the guidelines early on.”

“It certainly meets all the requirements and intent,” said David Graham, the architect hired by the town to help review plans.

The five-member board voted unanimously to approve the plan.

“We figured it would be kind of hard to shoot down,” Groce said.

The challenge of designing the house wasn’t so much the style, but making the building fit on the 50-foot-wide lot, Groce said.

The minimum lot width allowed by the town is 40 feet, and there were concerns that many of those lots would be unduly restricted by the 80 percent rule. The council included a provision in the code that owners would be allowed at least 2,000 square feet of living area even if they had to exceed the second floor limit.

Another challenge was making the traditional design work with the requirement that houses on the island be elevated an extra 3 feet above the height required by federal flood regulations. That gives owners on the island a discount on the premiums for federally-subsidized flood insurance.

The first floor of the Groce house is 13 feet above the ground level. Graham noted that the north side of the house, with no porch, presents a wide expanse of horizontal lattice and siding.

“If you could break it up with some vertical,” he suggested. “That’s beyond the ARB.”

Newman said he would look at that. Groce said the landscaping would help.

“That’s the fun of it,” Groce said afterward. “Getting something that looks interesting, not just complying.”

The ARB is scheduled to meet monthly, but Fabbri doesn’t expect that it will have that many plans to review. In his nine years with the town, the most housing starts in a year was seven, he said.

There are a handful of people who are interested in building, Fabbri said, but he doesn’t believe any will have plans soon.