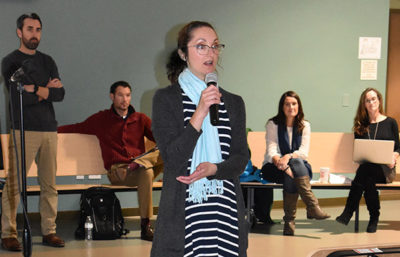 Nathalie Hunt with board members at a meeting on school finances last year.

As the search continues for a new director of the Coastal Montessori Charter School, the old director is being paid two-thirds of her salary as a consultant.

Assistant director Chip Hennecy was named interim director. Hennecy joined the school in August after 28 years as a teacher and administrator at public schools.

Board member Jessica Doll said 12 applications for the director’s job have been received, including one from someone who already works at the school. A committee will conduct long-distance interviews and then invite the finalists for interviews at the school.

An offer could be made to a candidate in late April, Doll said.The new director wouldn’t start until July 1, board chairman Ryan Fabbri said.

Hunt, whose salary was listed at about $72,000 a year in the school budget, received 100 percent of her salary for January and is now receiving 75 percent of her salary until her contract expires on June 30, according to the separation agreement between her and the board. She is also still receiving insurance, retirement and vacation benefits.

At a board meeting in January attended by about 30 people, board members said the pay deal was a “personnel matter” that couldn’t be made public. A copy was reviewed under a Freedom of Information Act request.

Hunt is not allowed to have contact with anyone at the school, the county school district or the media unless at the request of Fabbri or Kelly Hayes, its vice chairman.

Hunt is prohibited from representing the school in any way. She was also required to give up her school-issued keys and equipment and reveal all passwords she used to access school equipment.

The charter board provided Hunt with a letter of recommendation. In return she gave up all claims against the school, waived her right to a hearing before the board or the school district, and is not allowed to reapply for a job at the school unless invited to by the board.

Both sides also agreed to refrain from making defamatory statements about each other.

Hunt was hired in 2013 as the second director of the school and oversaw its move from a wing at Waccamaw Middle School to its current location in its own building.

She didn’t state in her message to the school why she was leaving. The charter school board only said she had resigned and was not dismissed.

A request under the Freedom of Information Act for documents related to Hunt’s departure was met with a request from the school for $1,993 to provide the information, with a deposit of $498.

Hayes, who is an attorney, said that it would take the director 56 hours to search for, retrieve and redact information from the documents.

Although the state law requires that the work be done by the lowest wage employee with the needed skills, Hayes said the information that must be reviewed may contain confidential information and can only be done by the school director.

“The school is not in a position to redirect resources from educational endeavors to fulfilling this Freedom of Information Act request free of charge,” she said.