As county sees first COVID-19 cases, distance is the watchword 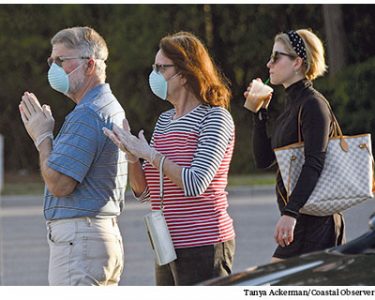 The first confirmed cases of COVID-19 in Georgetown County were reported this week as state health officials said the coronavirus pandemic had reached the “acceleration phase.” Two cases were reported Monday.

The state Department of Health and Environmental Control does not release information about the location of individual cases. “We’re not releasing details that could contribute to identifying any individual,” a spokeswoman for the State Emergency Response Team said. “We’re recommending everyone take the same disease prevention practices.”

“People tend to congregate because they have a false sense of security,” Dr. Linda Bell, the state epidemiologist, said at a press conference with the governor this week. “It is a behavior change that we need.”

Without information about people who are infected, first responders are “flying blind when responding to emergency situations,” the S.C. Association of Counties said in a letter to Gov. Henry McMaster, urging him to change the policy.

The association proposed that county emergency managers be notified about the location of people who have tested  positive for COVID-19.

With the pandemic in the acceleration phase, Bell said that it is not feasible to do contact studies for every case.

The rector of All Saints Church notified parishioners last week that three clergy from Mount Pleasant who had attended a synod of the Anglican Diocese of the Carolinas at the church earlier in the month were ill. They were later confirmed to have COVID-19. One, Bishop Steve Wood, was hospitalized.

“We got word out to folks who had been at the meeting and helped serve at the dinner,” the Rev. Rob Grafe said.

Hosting the synod on March 6 and 7 was an  “all hands on deck production” at All Saints, and he told parishioners March 20 that they  had been exposed.

The church was not contacted by DHEC, Grafe said.

“By the time that we heard that there had been somebody in our midst who had been affected, we were 12 days into our 14-day time frame,” he said, referring to the incubation period of the virus. “We were encouraged to self-monitor and stay away from others.”

Grafe said he was not aware of any parishioners who had become ill. He said a couple who had symptoms, “turned out to be allergies and false alarms.” They did not have the range of symptoms that qualified them for testing, he added.

A dinner for clergy and spouses was held March 5 at Quigley’s Next Door, an event space separate from Quigley’s Pint and Plate.

Josh Quigley said he was not notified by DHEC of the COVID-19 cases. While he thought that was strange, “we can all look at the chaos that’s been thrown into our own situations,” he said. He doesn’t fault the agency.

The two employees who worked at the event for 50 or 60 people showed no signs of illness, Quigley said. “I do take comfort in that,” he said.

The same space was used March 7 for a benefit for JB’s Celebration Park. Cindy Bindner, who organized the effort to complete the park that was a dream of her late husband, said she was not contacted by DHEC.

“It would be very challenging to try to track the contacts,” said Bindner, who is a doctor. “If it had happened, we would be seeing signs. I have not heard of one of them being sick.”

Bindner also noted “Quigley’s is very good about cleaning up. I saw them cleaning and cleaning.”

The synod began the day DHEC announced that it was investigating the first two “presumed positive” cases of COVID-19 in the state. By March 8, the number had grown to six.

“Nobody had any idea. We all made the assumption it was not here,” Bindner said. “It happened really fast. They can’t be faulted for that.”

As of Wednesday, there were 424 cases in 39 counties, according to DHEC.