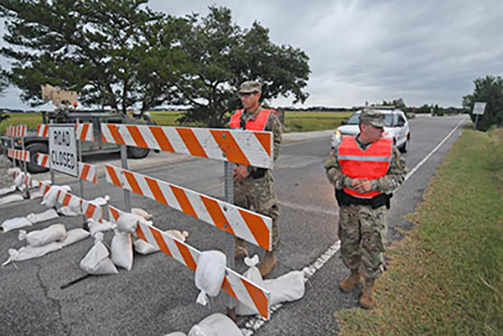 The National Guard helped keep the island off limits until Sunday morning.

With a Category 4 hurricane still churning toward the East Coast, members of Pawleys Island Town Council focused last week on how residents and property owners would get back on the island once the storm passes. Memories were still fresh of days spent waiting at the bridge in October 2016 following Hurricane Matthew.

“People went into Litchfield and DeBordieu, that flew all over people here,” Mayor Jimmy Braswell said. “We went days without anybody being allowed on the island.” He wants the town to improve its procedure for restoring access and suggested that residents should get priority over owners of second homes. “If you rent your home, it’s completely different,” Braswell said.

The town was due to restrict access Wednesday night when tropical-storm force winds are expected around nightfall. “If you want to stay, you’re more than welcome to stay,” Police Chief Mike Fanning said, in spite of the evacuation order from Gov. Henry McMaster issued Monday. (The order was lifted Saturday afternoon and the island reopened Sunday morning.)

But traffic will move only one way, and that’s off the island, he said.

Administrator Ryan Fabbri said police planned to go door-to-door to notify occupants. During Hurricane Matthew five people stayed in houses as the eye of the Category 1 storm moved across the island. Fabbri talked with four of those people afterward. “They said they would never do it again,” he said.

Once sustained winds reach 45 mph, police and other emergency services will seek shelter, Fanning said. The town has asked for National Guard troops to help staff checkpoints on the two causeways to the island after the storm.

In each of the storms in the three previous years, the town waited for the governor to lift the evacuation order before allowing people on the island. Fabbri agreed “local conditions should ultimately dictate when property owners are allowed to return.” But he told council that doesn’t necessarily mean they will return sooner.

After Hurricane Matthew, “the south end was under 4 feet of sand,” Fabbri said. “If we let the people on Springs Avenue right after a hurricane, I don’t know how they’re getting there.”

There was anger after Hurricane Matthew because some people used letters from then-Mayor Bill Otis to gain access to the island. Fabbri said those letters were provided so property owners would be able to clear checkpoints on their way to the coast.

“We need to revamp our process,” Fabbri said, but there hasn’t been time between hurricanes. “We’re still dealing with the last one.”

Braswell suggested that town officials could tour the island to help with assessments. Fabbri said those are done now by teams from Midway Fire and Rescue and the Georgetown County building department.

“The reason to keep people off the island is it isn’t safe,” Fabbri said. “A damage assessment team checks every structure.”

Council Member Guerry Green proposed letting town officials accompany the assessment teams. That would help them deal with the calls they get from property owners.

If the council can tour the island and see conditions, “you can make a statement” if it is unsafe, Fabbri said. “Maybe it is different coming from you guys.”

Green also urged the town to provide more information about conditions after a storm. He endorsed a suggestion from Council Member Sarah Zimmerman that the town buy a drone to provide images.

“The anxiety goes away when you see the condition of your house,” Green said.

Braswell also wants the town to improve its outreach to property owners through email and social media. “It didn’t work well last time,” he said.

Since then, Fabbri said, the town has accumulated more email addresses from owners and has an intern from Coastal Carolina University who will help post messages. “We did our best to get the status out” after Hurricane Matthew, he said, but many people wanted information about their property that the town couldn’t provide.

“I think the drone would do wonders,” Zimmerman said.