At Pawleys parade, competition for trophies gets tighter – Coastal Observer

At Pawleys parade, competition for trophies gets tighter 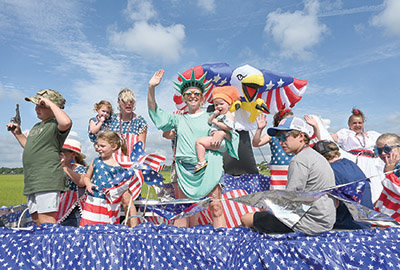 The Schroders had never entered a float in the Pawleys Island Fourth of July Parade.

“We’ve never been able to get up early enough to be here,” Caroline Schroder said.

This year, they made it to the South Causeway before the 10 a.m. start, with a pickup truck towing a trailer full of kids and Lady Liberty, Stacy Schroder, who carried a torch in the form of her year-old daughter Grace wearing a spiky orange wig.

They made the tour of the island from the Bird’s Nest to the north end, where they were staying, but didn’t make it back to Town Hall. That meant the award for Most Patriotic entry went unclaimed as the other 61 floats made their way home after Monday’s parade.

“We had no idea,” Schroder said. “We went down to see some friends. They told us that we won.”

This year’s 55th annual parade was the most competitive as far as trophies were concerned. The town Events Committee, which organizes the parade, cut the number of awards from more than a dozen to just four for floats. There are also prizes and honorable mentions for the best house and dock decorations.

“Maybe we went too far. We’ll have to settle on a happy medium,” said Scott Townes, who chairs the committee.

The town adopted trophies in the early 1990s as a way to inspire creativity and to prevent people from throwing water balloons and spraying water at one another. 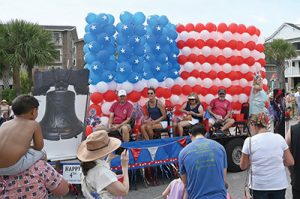 First place went to this float from Pawleys Sunset residents.

The folks who won the first place trophy said they had their eyes on the prize after they teamed up for a community entry last year. The group lives in the Pawleys Sunset neighborhood on the west side of the creek.

Last year, they entered a series of golf carts that shared an aquatic theme. This year, they got a truck and trailer to hold an American flag made from balloons. Uncle Sam and Lady Liberty added to the theme of “Let Freedom Ring.”

Brent Harvey got credit for the centerpiece. He calculated the pressure for the balloons and accounted for expansion in the morning sun.

“I used to drive a nuclear sub,” he said. “Now I blow up balloons.”

A diver riding a shark won second place for the Volk family.

The diver under the mask may have looked familiar. He was made with a Joe Biden mask from last year’s Biden-Trump float that won a trophy last year for Most Humorous.

“We didn’t want it to be political,” Ken Volk said.

“The whole family spent half a day building it,” said Volk, who owns Carolina Nature Nook with his wife.

Third place went to another new entry from the Crosland family. With shared ownership, they can’t always count on the holiday week, but this time they had a year to plan, said Weatherly Hulsey.

“We still waited until the  last minute,” she said

Her father said they needed to include Alice Flagg because the legendary spirit was missing from last year’s parade.

With ownership shared among five siblings with 15 grandkids, the trophy will stay at the house.

“Hopefully, it will inspire them” to enter next year, Hulsey said.

The Schroders, who live in Greenville and Columbia, were inspired even though they were still waiting for their trophy to be delivered on Wednesday.

“It was so much fun,” Caroline Schroder said. “We’ve thought about it. We said maybe Noah’s Ark.”