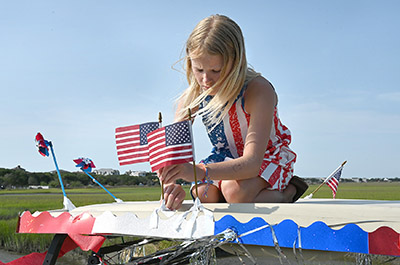 Addison GIllespie, 10, attaches flags to her grandfather’s golf cart before the parade.

Thanks go to Casey Peissel, his family and his future in-laws.

They stopped the parade at 336 Myrtle Ave., just short of the town’s Nature Park, so Peissel could propose to his girlfriend of five years, Kelsey Maloney.  But not for long.

“It was an immediate yes,” Maloney said.

She surprised by the proposal and to see her family from Connecticut on a float with Peissel’s family from Hickory, N.C. They all wore white and rang small hand bells.

Peissel’s mother, Suzanne Norris, handed out bells to the people in neighboring floats as they lined up on the South Causeway before the parade. Spectators also joined in the celebration.

“I always thought when it happened it would be the two of us,” Maloney said.

She soon realized that she was actually the last to know.

Peissel said his first idea was to propose on the beach. He has been coming to Pawleys Island all his life. His grandparents moved to Pawleys Island from Germany in 1969. His grandfather, Dieter Kirbach, worked for Georgetown Steel. He had a front row seat on the decorated trailer.

A beach proposal on the Fourth of July posed some problems. Where would they park?

Peissel talked it over with his family. Someone suggested a float in the parade. He thought that might be a little “cheesy.”

A family friend owns the house at 336 Myrtle. His family has a condo at Litchfield Retreat. Maloney’s family stayed at the Litchfield Inn.

“We were worried about their paths crossing,” Peissel said.

Maloney thought it was strange that no one in her family answered her text message on Sunday. She figured they were watching a parade.

Since they had been talking about marriage, Peissel was confident his proposal would be accepted. He owns Backstreets Grill in Hickory and Columbia. Maloney is an IT consultant who lives in Columbia. It was her first visit to Pawleys Island.

“It’s a really special place for Casey and his family,” she said.

Their float won the award for Most Original. Peissel said he would leave it on the mantel at 336 Myrtle to thank the owner.

They haven’t set a date for the wedding. It might be at Pawleys Island. If it’s on the Fourth of July, another trophy may be in the picture. 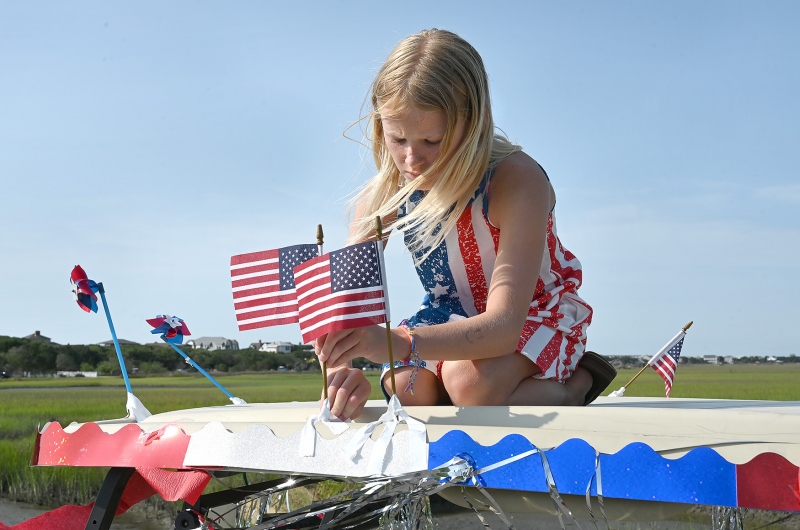 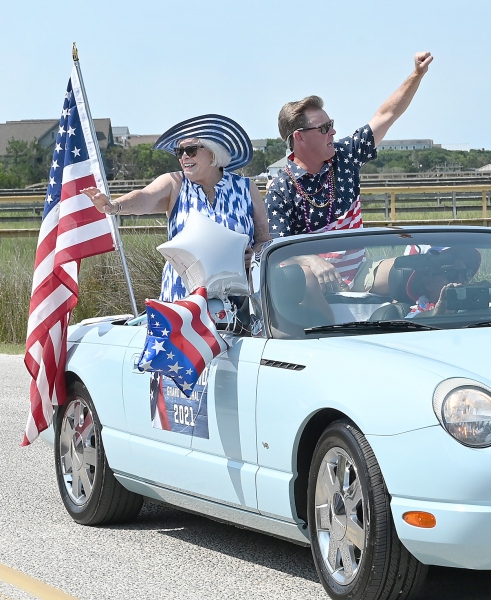 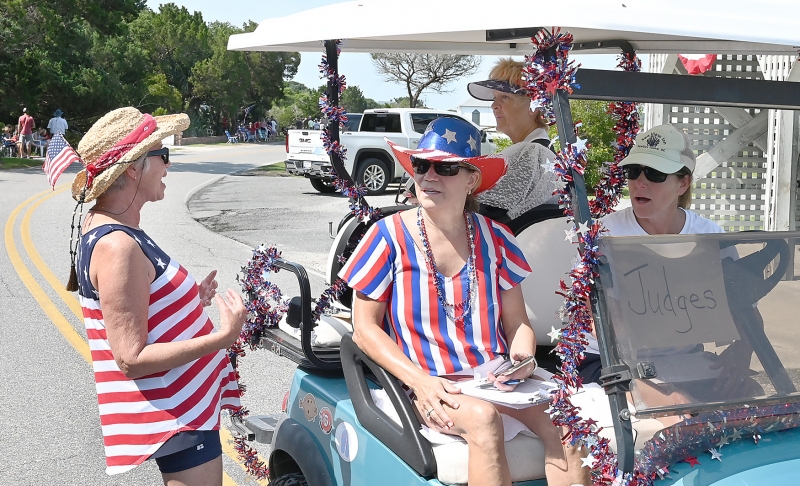 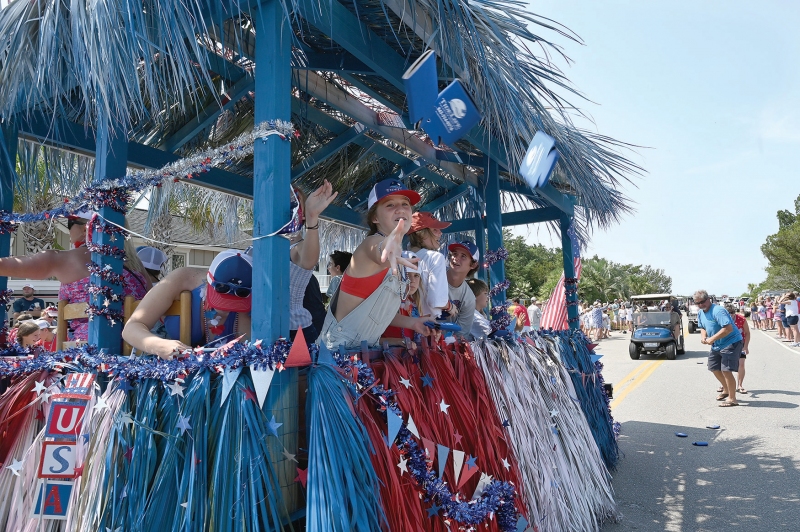 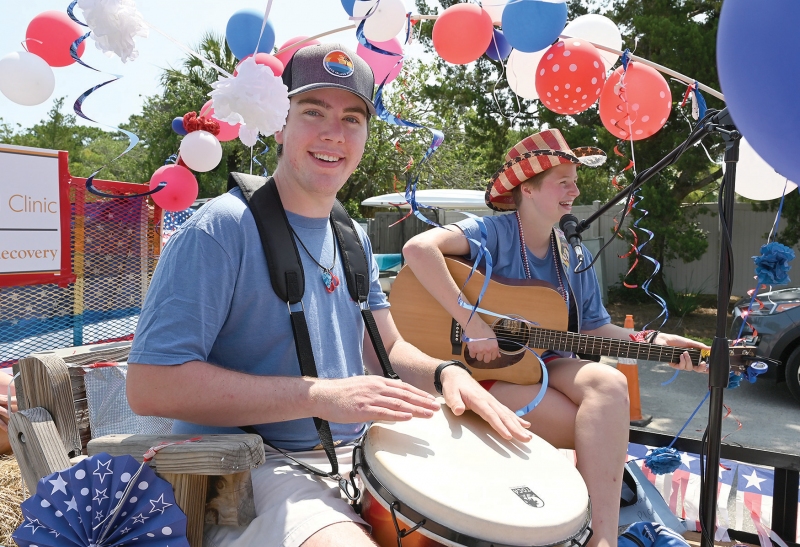 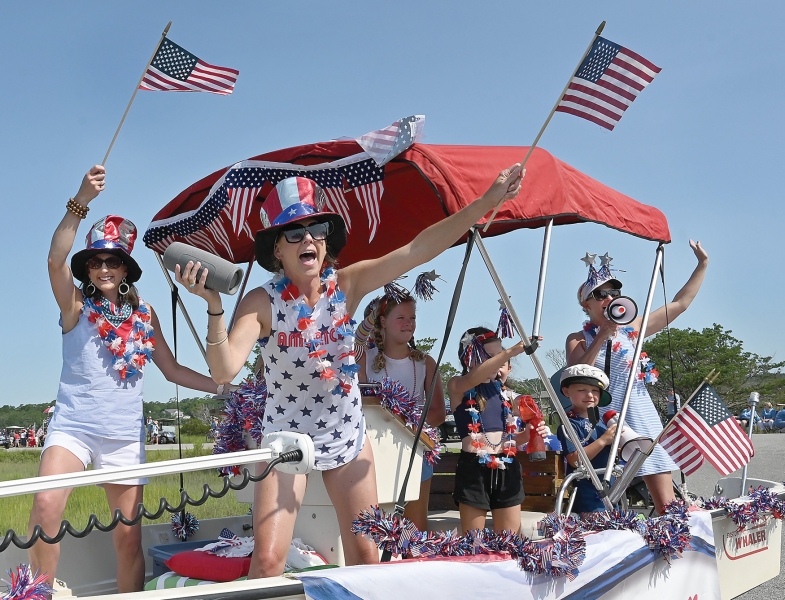 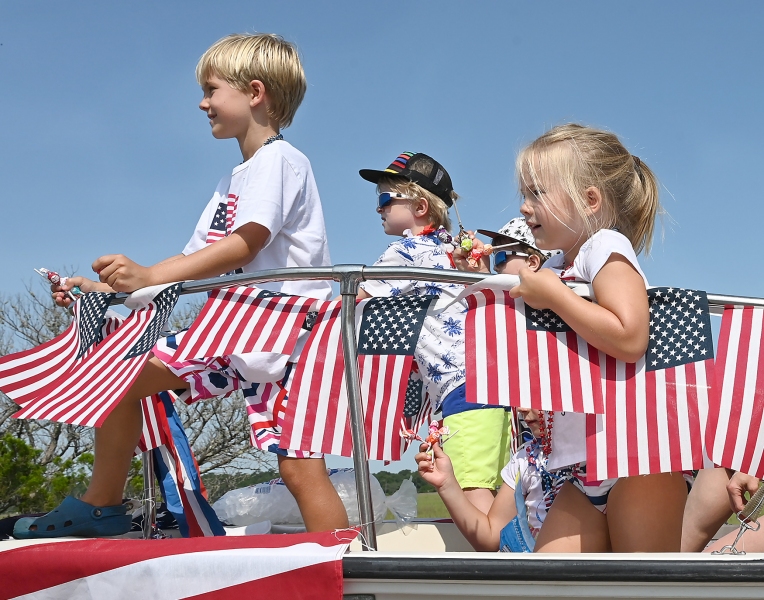 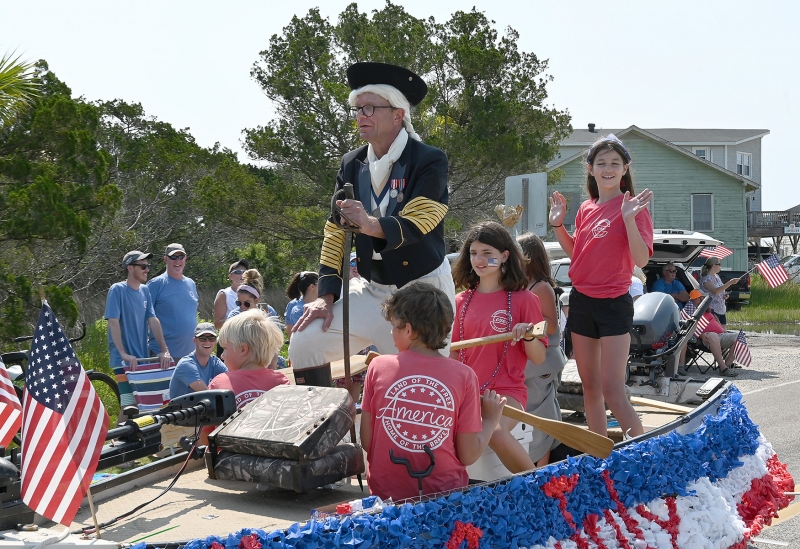 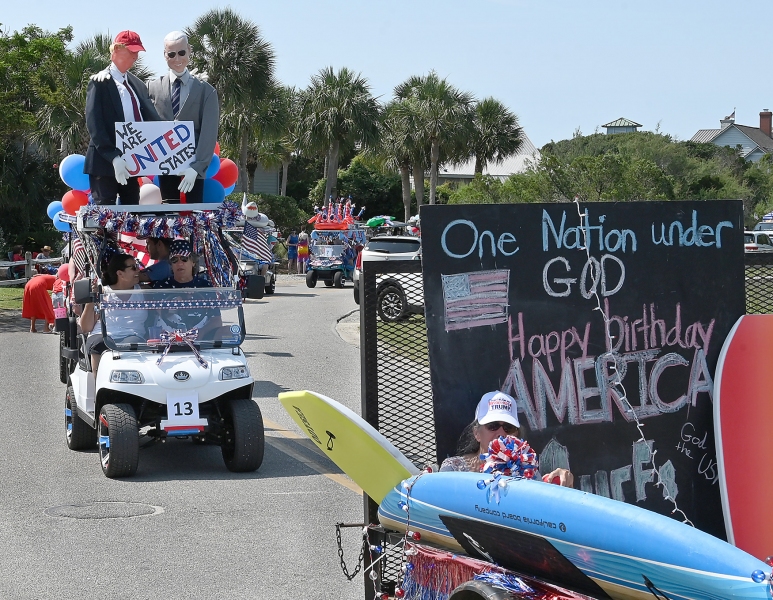 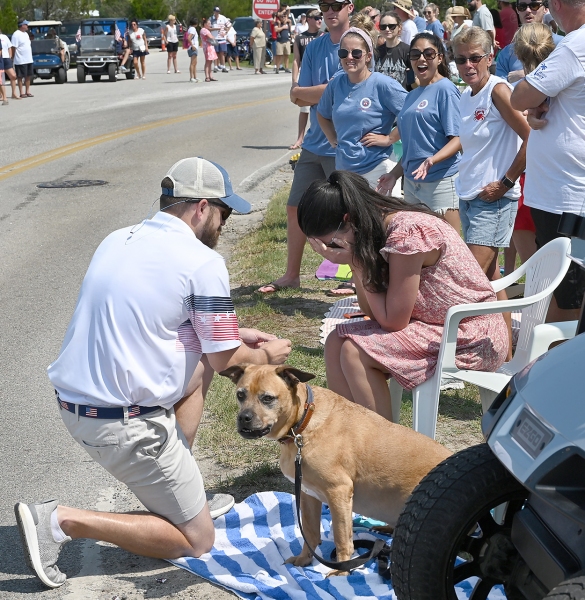 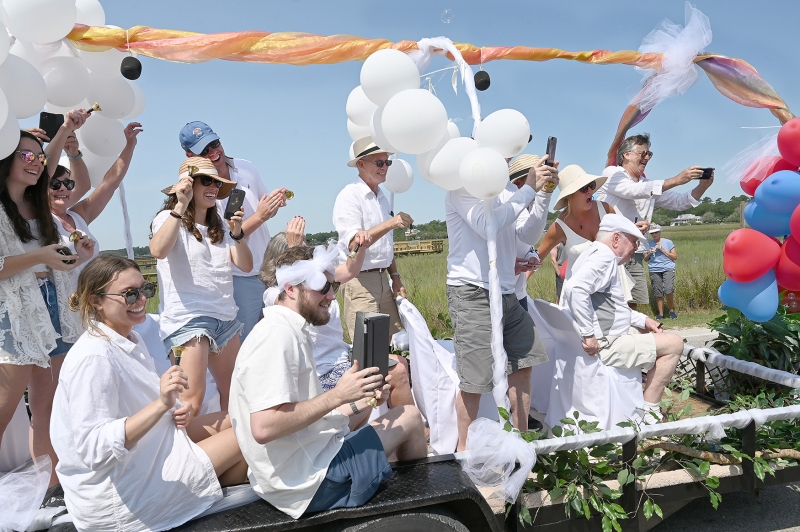 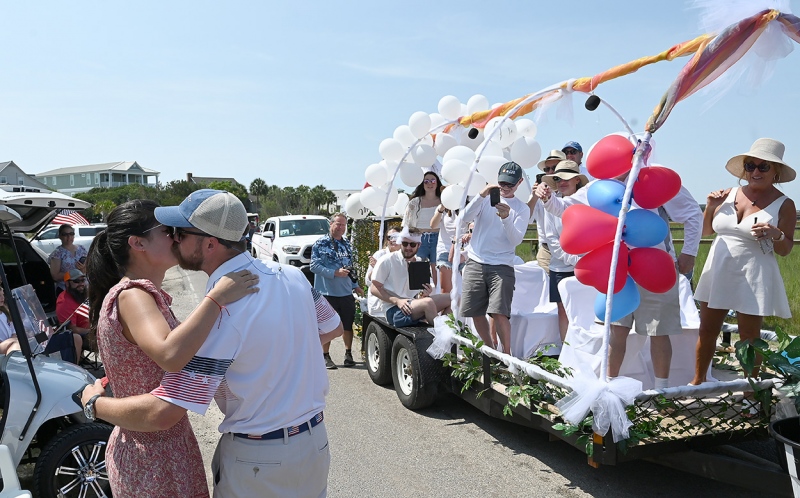 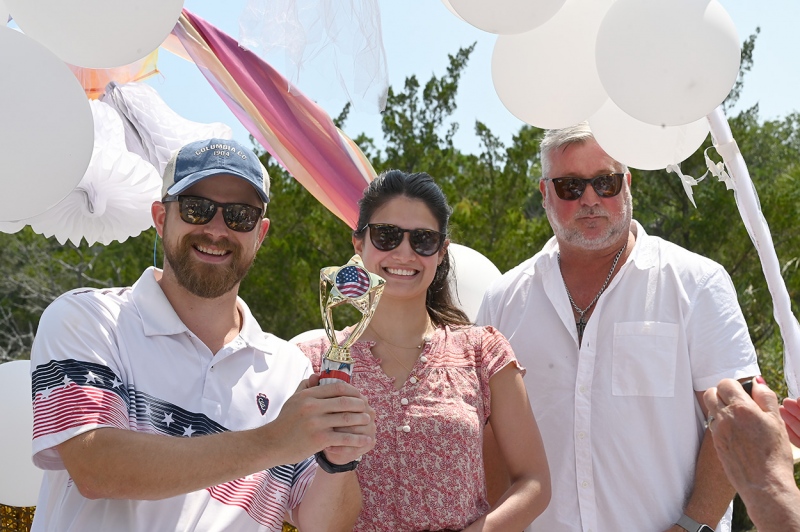 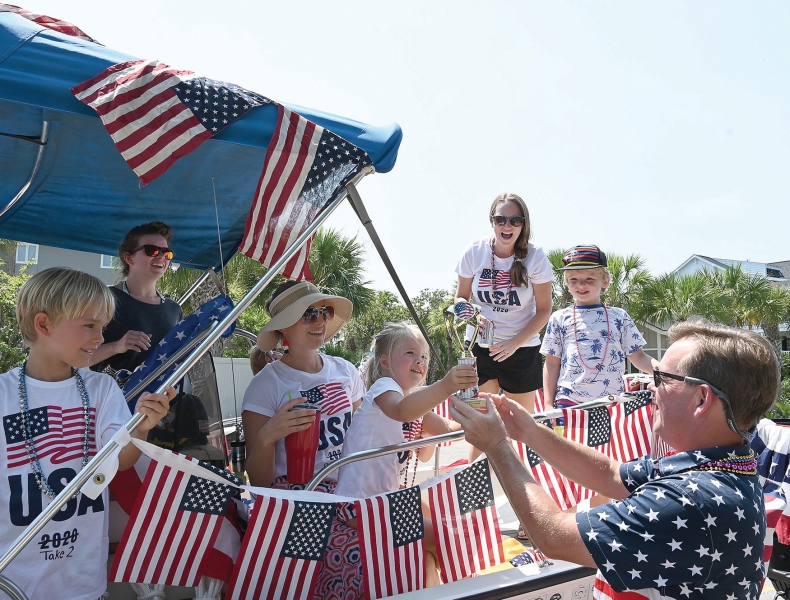 Parade makes up for lost time

The first cars arrived around 6 a.m. The Pawleys Island Fourth of July Parade started at 10.

David Kaiser, a retired Navy commander who lives in Hagley, was able to sleep late. He didn’t get to the island until 9, but he still got prime spot at the front of the parade.

“We didn’t want to be spectators, we wanted to be participants,” he said.

The Chevy pickup with bunting and a crew of flag wavers in the back was something they threw together.

It was easier than looking for a parking spot. “This is a lot less frustrating,” Kaiser said.

There were plenty of first-timers among the 56 floats in this year’s parade.

Ten families in the Pawleys Sunset neighborhood off the South Causeway created a float in the spirit of e pluribus unum. Each of the individual entries was part of collective theme: Red, White and Deep Blue Sea.

“Less than  half the people have been in it before,” said Kristen Citrano, who organized the project.

While they didn’t win any of the trophies presented by the town, they had their own award ceremony later, she said.

Ken Volk learned about the parade last year after moving to True Blue from Dubai. “People said it was a neat thing,” he said.

The 2020 parade was canceled due to the pandemic, although there was a July 3 drive with a fire truck and the grand marshal.

Volk was ready this year with figures of Donald Trump and Joe Biden with an arm around each other’s shoulders mounted on top of his golf cart. “We’ll offend everybody,” he said.

The judges were not offended. They gave him the trophy for Most Humorous.

There were also some veterans in the parade, including George Washington.

George Lever took that roll, with a frock coat, white wig and a three-cornered hat. He stood in a jon boat as kids rowed him across the Delaware. “It’s a little hot,” he said.

Fran Ward was this year’s grand marshal. She started coming to the island when she was a girl attending Winyah High in Georgetown and is a long-time resident in the Bird’s Nest section.  Ward rode at the front of the parade with Mayor Brian Henry.

“I saw so many people I hadn’t seen in awhile,” she said. “It was one of the most memorable days of my life. I was so honored. It was like a dream.”