Award will honor June Jordan, 82, artist who was a steward of the inlet – Coastal Observer

Award will honor June Jordan, 82, artist who was a steward of the inlet 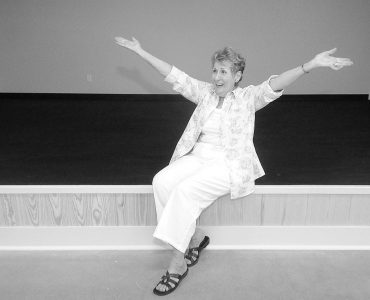 June Jordan in 2014 celebrates the opening of the new Murrells Inlet Community Center and its stage.

When June Jordan, 82, passed from this world at a local hospital on the morning of April 7 after a protracted battle with cancer, the community of Murrells Inlet lost one of its brightest flowers and most ardent – though mostly unsung – supporters and environmental advocates. She was to be honored with the Murrells Inlet 2020 Golden Oyster Award for Environmental Stewardship this Sunday at 10 a.m. before the start of this year’s Spring Tide cleanup; and so she will be.

June’s spirit, and her vibrant, giving embrace of the community and the saltmarsh, were as clear and pure as the kingfishers who merrily roam the Inlet creeks, and the harlequin oystercatchers who people the shellbanks. But to her friends and family, and the many local causes  that she played such a vital role in, June Jordan will be missed, not just for the work she did to spread their mission and message, but as one of the most delightful people, and truest friend, that any of us could hope to meet.

She was born June Jacobs in Portsmouth, Ohio, on Feb. 3, 1939, the only child of Lester and Helen Jacobs.  She graduated from New Lexington High School in 1957, then attended the Dayton Art Institute.  She and Al Jordan married in 1961, and while Al worked his way up to become assistant city manager of Kettering, Ohio, June worked in graphic arts in and around greater Dayton.

She and Al shared almost 60 years of marriage, and had two children, daughter, Tracy, and son, David, both of whom now live in Atlanta.

June was always an artist, adept with brush, camera and computer. When she and Al retired and bought a house here in 1995, she took to the upper Lowcountry, its lands and waters, people and history, with an unquenchable fervor and curiosity. She began at once to look for ways that she, as a highly creative graphic artist and behind-the-scenes organizer, could help to celebrate and conserve the things she had grown so quickly to love. She wasn’t long in finding such work, and although she never sought recognition, she never refused a good cause or project. She was a perfectionist, which sometimes kept her working at her computer right through the night.

June became a member of the Murrells Inlet Community Theatre, a group started by Holley Aufdemorte in 1995.

Always behind the scenes, June helped to organize the theater, and created all the posters and flyers for upcoming productions. She planned and painted sets, sewed curtains, constructed or sought out props at local thrift stores, designed and produced the program for every play, worked backstage to dress and prepare the actors going onstage, organized the post-production parties, and served as the theater’s secretary.

“As in all theater groups,” Aufdemorte said, “there was always drama, both on and offstage. Not so with June. When the going got tough, we could always count on June to keep a cool head, crack a joke and help find a solution. She was a joy to work with, and everyone loved her.”

June designed a dozen years of Spring Tide T-shirts, almost all of them featuring an emblematic kingfisher, and almost all of them still to be seen today on people at the post office, along the Marshwalk or in the bars and restaurants.

Always shy of recognition, she never signed her name to her Spring Tide artwork, although her T-shirts helped generate the funds to keep the annual cleanup going. (This year will be the 29th). Her input was tremendous, every T-shirt a work of art.

Meredith Harrison, executive director of Murrells Inlet 2020 and now the chief organizer of Spring Tide, remembers June as “such a light in this community, always cheerful, full of fun, and ready to help do anything that she thought would further the Inlet community’s goals.”

In 2006, June and Al joined the Greater Burgess Community Association, a group whose purpose is to bring together the community along Highway 707 between Murrells Inlet and Socastee, which also contains Freewoods Farm, another cause to which she and Al were devoted. June researched the Burgess Community’s history, collected and shared old photographs, put out a regular newsletter, kept community members informed through Facebook and, with Al, organized meetings, litter cleanups and other special community events.

When Rick Baumann of Murrells Inlet Seafood began Trees for Tomorrow to give away native-species seedlings each year to all who wanted them, he turned to June for a board member, and she produced the flyers and announcements for the annual event, founded in 2012 and responsible thus far for the distribution of 20,000 trees.

“June Jordan was an eager supporter of every good and worthy cause around Murrells Inlet,” Baumann said. “Whenever she lent her beautiful mind, her infectious smile – and those gorgeous eyes – to a project, there was an immediate uptick in enthusiasm.”

Baumann added that there was always an effort to nominate June for awards she never sought.

“If there is ever an award for perpetual community service, it should be named after her,” he said.

June also gave her energy and talents to Stop Offshore Drilling in the Atlantic (SODA). The group, which worked in a coalition of like-minded groups in other coastal states, was successful in achieving the current moratorium on exploration and drilling in Southeast coastal waters.

“June had a wish for all of us to be better stewards of the earth and for us to protect, nurture and replenish the beauties of nature,” said Sandra Bundy, a SODA leader. “She was always willing to do her part toward that aim. Through her art and behind the scenes actions to capture the moments or share the message, she did just that.”

After meeting Goffinet McLaren at a Trees For Tomorrow event, June joined her new friend in the Chirping Birds Society, dedicated to eliminating single-use plastics. The group convinced several Marshwalk restaurants to end the use of plastic straws.

McLaren remembers June as “a joy with whom to work, and one wise beyond words. June was a ‘chirping bird’ par excellence and has been snatched from her family and friends much too soon. Her contributions and commitment, though, will last long beyond her years.”

These are but a few samples among June’s many contributions and accomplishments. She was also a talented and sensitive photographer who had her work displayed in the Waccamaw Library, and an ever-curious observer of the natural world. When she photographed an unfamiliar bird in Brookgreen Gardens or at Huntington Beach State Park, she wouldn’t be satisfied until she’d emailed around and found someone who could identify it. (And although she loved our green anole lizards, she would not abide a copperhead in her garage.)

In what spare time all their volunteering allowed, June and Al, on their own or with old friends, loved to hit the road and explore the country. She loved nothing more, she said, than to spend the day marveling at a wonder like Zion National Park, get a good dinner and a good night’s rest, then pack up next morning and travel on for Bryce Canyon, where fresh wonders awaited. Like many photographers, she was intoxicated by landscape and responded deeply to it.

June never forgot a kindness and seemed to live to brighten other people’s days. As cheerfully and bravely as she could, she endured a grueling program of chemotherapy that in the end was simply too much for her. Even then, she was thinking of others.

When June learned from her chemo nurse, Rachel, that she and Rachel’s daughter Madelynn shared the same birthday, she created a special birthday card for Madelynn and gave it to Rachel during one of her many chemo infusions.

June, of course, never mentioned that. But Rachel and Madelynn will never forget it.

That, in a nutshell of kindness, generosity, creativity and gentleness, was June. She was indeed a flower of the Inlet, an irreplaceable one that will bloom on in the hearts and memories of those who knew her and those whose lives she touched.

No service is yet planned for June, but, as noted, she will be honored posthumously with the Murrells Inlet Golden Oyster Award at the 10 a.m. commencement of Spring Tide, this Sunday at the Hot Fish Club. And her name will be added to those of previous recipients on a plaque on the Murrells Inlet Veteran’s Pier.