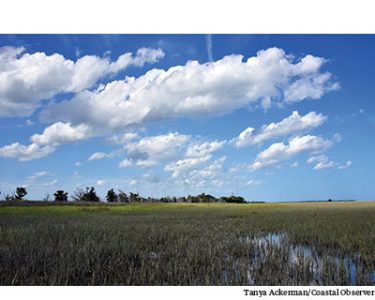 Hobcaw Barony includes about 8,000 acres of marsh, including areas along North Inlet.

Three centuries after the first land grant and 55 years after its creation, the Belle W. Baruch Foundation has gone to court to confirm that it owns all of the property known as Hobcaw Barony, particularly 8,000 acres of marsh.

A suit filed last month in Circuit Court asks that the portions of Hobcaw between the mean low and mean high water marks be declared property of the foundation, not the state of South Carolina.

“It’s the ricefields and the marsh, the intertidal marsh,” said George Chastain, the foundation’s executive director.

He called the action “procedural.”

“We have a good relationship with the state,” Chastain said. “It’s not a confrontational thing.”

Bernard Baruch, a Camden native who made his fortune on Wall Street, bought the former rice plantations in 1905. He later sold it to his daughter, Belle, who left the property to the foundation created in her will.

In South Carolina, “the state has presumptive ownership of all lands below the high water mark,” said Amy Armstrong, executive director of the S.C. Environmental Law Project. “If the state owns it, it is able to lease those public-trust lands.”

By establishing its ownership in state court, the Baruch Foundation will have “exclusionary rights,” she explained. “There are two scenarios where that has mattered. If someone lives adjacent to it, they can’t cross it without your permission. And, you can use it to prevent someone from undertaking an activity in that area.”

The Baruch Foundation traces its ownership back to grants from the kings of England, according to documents filed with the court.

“The evidence in this action clearly and convincingly establishes as a matter of fact and law that the plaintiff, the Belle W. Baruch Foundation, possesses a fee simple interest in all of the marshland,” according to the suit filed by Thomas Tisdale, a Charleston attorney, on behalf of the foundation.

Six kings’ grants and six grants from the state of South Carolina to previous owners of the property that now comprises Hobcaw Barony form the foundation’s chain of title.

“They together establish, in each grant and its accompanying plat, the grantor’s clear intent to convey the land and marsh contiguous to the land between the mean high water mark and mean low water mark,” the suit states.

Hobcaw Barony runs from the Atlantic Ocean to the Waccamaw River and is bounded by Winyah Bay on the south and DeBordieu on the north.

The Baruch Foundation was created to support teaching and research into forestry and marine biology by universities in South Carolina. The suit was filed as the University of South Carolina’s Baruch Institute for Marine and Coastal Science prepared to mark its 50th anniversary.

John Vernberg, the institute’s founding director, recalled seeing the property for the first time in 1969. “It was amazing to think that a site like this was going to be available for study,” he said. “There are always some people that say, ‘that property’s sitting over there. They’re not doing anything with it. Where’s the money? Let’s do everything we can to break it up and sell off the lots.’”

Chastain said the foundation talked to the state attorney general’s office before filing the suit. “We don’t expect any issues,” he said.