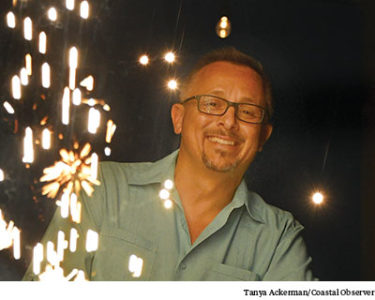 It’s enough to know that the fireworks that will dance across the night sky above Pawleys Creek on the Fourth of July are free for those who know where to look.

What started with a couple of neighbors shooting off fireworks has grown over the last decade into the kind of pyrotechnic show that inspires people to make sure they’re in the area about 9:15 or 9:30 p.m. on July 4.

“I’ll get texts saying, ‘are you shooting fireworks this year? What time?’ ” Marlow said. “Which is good because you don’t have people shooting a bunch of trash into the creek.”

He likes the fact that it has become a tradition.

It was a former neighbor, the late Bob Moran, who first lit the fuse. “He started shooting quality fireworks on the Fourth of July,” Marlow said. The families eventually combined their efforts. “When we started getting a band is when it really took off,” he said.

The evening is actually a private party for family and friends, hosted by Marlow and his wife Molly and Tony and Brandy de Haas. The fireworks are consumer-grade, but Marlow has built racks to launch them

from the metal roof of his creek dock. They are a step up from what’s sold in a fireworks store.

“In a store, you end up with quantity versus quality. What we do now is, we’ve gone with a great deal of quality – and added significantly to the quantity,” Marlow said.

Buying the higher-end devices means there is none of the excess paper added for retail store display that winds up as trash. Nor are there the plastic parts that come with over-the-counter fireworks that wind up as litter on the beach after the Fourth.

Another difference is that Marlow can rely on the timing of the fireworks he buys, which enables him to create a uniform display. “One of the first years, with smaller stuff, it went on about 30 minutes,” he said. “Now that we’ve kind of got it down pat it’s 12 to 15 minutes.”

It helps that he can launch them remotely. He used to light them by hand.

“The first year after we really got into it, we did that with probably 40 or 50 different items. After it was over, Molly said ‘what did you think of the fireworks?’ And I said, ‘I didn’t see any of them,’ ” Marlow recalled. “We were lighting and ducking, basically.”

It takes him about two days to assemble the show. He keeps a list, but many of the devices carry over from year to year.

“I was really happy with it last year,” Marlow said. “If we come close to last year, I think it will be spot-on because we’ve got larger, different effects. It makes a difference for people on the island, too.”

The town of Pawleys Island bans fireworks because of the risk of house fires. The last legal display was almost 20 years ago, Dec. 31, 1999. Residents and vacationers now look to the mainland, to the Marlow dock between the two causeways to the island, for a Fourth of July show.

There have been few disappointments over the years. “Whenever I see something with the fireworks that doesn’t go in sync, nobody else notices,” Marlow said.

Marlow, an investigator with the Georgetown County Sheriff’s Office and owner of Pawleys Kayaks, assembled the devices and fuses in the launch racks this week with his youngest son Wheeler, 13. “He’s sort of the apprentice,” Marlow said.

On the day, friends will arrive in the afternoon to put the racks on the dock. Just before dark, he can count on the wind dying down. No one is allowed on the dock during the show.

If all goes as planned, there will be a little less overlap between the displays. That will give the audience, wherever they are, a better chance to appreciate the effects.

“When I was a kid, I thought fireworks were a tremendous waste of money,” Marlow said. “But you didn’t buy the good stuff.”