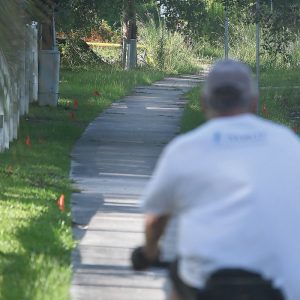 The sidewalk on Waverly Road was built in the 1980s.

The aging sidewalk along Waverly Road should be replaced by a multi-use path by the end of 2022 under a proposal to spend the remaining funds from Georgetown County’s capital improvement sales tax.

County Council this week approved $7 million worth of projects, a million for each council district, that will use up all but $3 million of the funds collected by a 1-cent local sales tax between 2015 and 2019.

One project not on the list was a municipal complex for the town of Andrews. The council rejected repeated requests from the town’s mayor to add to the $3 million allocated for a police and fire complex to build a $5.7 million municipal building.

The Waverly Road project will complete the Bike the Neck route from the county line at Murrells Inlet to the South Causeway at Pawleys Island. Council Members Steve Goggans and Ron Charlton combined their districts’ allocations for the $1.85 million project.

“That puts you in a pretty good position to get grants,” he said.

Bob Anderson, who beat Charlton for the District 2 council seat last year, said he was happy to go along with the spending decision. He made the motion to approve the project list.

“The $7 million you’re getting ready to spend on related issues is going to be spent wisely,” he said.

He was on the council in 2014 when the penny sales tax was approved by voters. It was estimated to raise $28.2 million, with $6 million going toward a federal and state project to restore the depth of the shipping channel through Winyah Bay. The cost of the project exceeded the estimates and was never started.

The county has kept the $6 million for other port-related projects or for economic development. Anderson said that was one of the things that helped convince voters to support the sales tax, and he was comfortable spending the surplus knowing there was still money available for projects that will boost the county’s tax base.

Council Member John Thomas allocated his $1 million to a traffic control system, known as Opticom, that would give ambulances and fire trucks priority at traffic lights. The system was first proposed by a citizens group over three years ago. It will include signals outside Council District 1.

District 2 will also get $199,870 for improvements to the Midway Fire and Rescue station in DeBordieu.

All the projects should be completed within 18 months, Administrator Angela Christian said. “Some projects will be done faster than others,” she added.

The remaining $3 million will be used for contingencies in the approved projects. Any funds remaining after that will have to be allocated by the council.

The proposal requires one more reading from council. Members met last month in executive session to get legal advice on the request from Andrews for more money.

The town was approved for $1.5 million in the sales tax referendum, but got an additional $1.5 million because costs rose for the police and fire building.

Last year, Mayor Frank McClary told the county the town had hired a firm to design a “municipal complex.” He asked for an extra $2.7 million. Two more requests followed.

In January, the members of the town’s volunteer fire department asked the county to deny the request. Members said police and fire would occupy less than half of the proposed municipal complex.