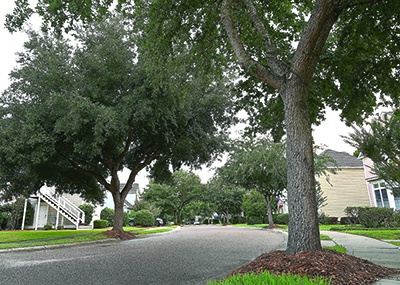 A homeowners association will have to find an alternative to cutting down trees that is says are damaging the community.

The Reunion Hall Homeowners Association at Willbrook wants to cut down 30 live oaks because the trees’ roots have damaged sidewalks and roads and could eventually damage the stormwater system and houses. The trees were planted in one of the three neighborhoods that comprise the development 16 years ago.

Kristal Infinger, the Georgetown County zoning administrator, denied a permit in January 2020 to remove the trees because no structures were threatened, a requirement of the tree regulations. The HOA asked the county’s Board of Zoning Appeals, to overturn Infinger’s decision.

Dan Stacy, agent for the HOA, argued that the regulations, which are part of the zoning ordinance, don’t define a structure.

Board member Cindy Person pointed out that the definition of a structure in the zoning ordinance specifically excludes sidewalks and pavements.

“I can see if structure wasn’t defined to specifically exclude sidewalks, I could understand that there might be some leeway. But it’s pretty black and white,” Person said. “As I read the ordinance, structure is simply limited to buildings. The ordinance is what the ordinance is.”

“This body is charged with the interpretation of this ordinance,” Stacy said. “I’m asking this body to interpret this ordinance to allow this particular situation to occur and be addressed.”

Board member Will Moody asked Stacy whether the trees were planted on top of water lines or fiber-optic cables.

Stacy said stormwater and power lines are about 12 feet from the trees.

According to Stacy, the HOA got estimates ranging from $35,000 to $65,000 to fix the sections of sidewalks that are currently damaged. Repairs would include removing and replacing the concrete sidewalks, chopping the tree roots and installing new sidewalks.

“We’re not real thrilled about cutting down live oak trees, but it’s causing great damage to the community spaces here and it would be a great cost to this association,” Stacy added.

Reunion Hall resident Chris Steinmuller pointed out that the trees are only causing problems in one of the development’s three neighborhoods, but the cost for repairs may be passed on to all the residents.

Steinmuller is concerned that any attempts to cut the roots or put growth retardant on them could cause a tree to fall and cause damage.

According to Steinmuller, the HOA’s insurance carrier has said if they cut the roots and then something causes the tree to fall over they could be liable.

Board member Harry Coker asked whether the HOA could remove the sidewalks since there isn’t a lot of traffic in the neighborhood.

Infinger said the HOA would need permission from the county to do that.

Board member Tim Onions said the cost for repairs was only going to grow, increasing the burden on the homeowners.

Infinger said not all of the 30 trees the HOA wants to remove are causing damage.

Board member Eileen Johnson said the city of Georgetown has been dealing with live oak roots damaging sidewalks and storm drains for years.

“That’s part of living in the South. The oak trees,” Johnson said. “If we’re going to just rip everything up because it’s an expense, maybe you need to live somewhere [else].”

Residents in the St. Charles Place neighborhood of Charleston-style homes built close to the street gave the board different views of the oaks.

Art Murphy believes the tree ordinance is geared toward new development and protecting properties from being clear cut. He said roots from a live oak are approaching his house.

Overturning Infinger’s decision would give the HOA options, he said.

“This is a problem that’s not going away,” Murphy said. “Step up and do the right thing and give the homeowners a chance.”

Goffinet McLaren pointed out that trees are a simple solution to rising temperatures.

“Trees are not only aesthetically beautiful but they add to the overall value of our homes,” McLaren said. “I request that you deny this request to cut down our trees. In my opinion, it would be a crime against nature.”

The board voted 5-1 to uphold Infinger’s decision.

“We may want to help, but if it’s beyond what we’re authorized to do under the law, our hands are tied,” Person said.

“I think we’re dropping the ball,” Onions said. “I think something’s got to be done.”

The HOA still has the option of asking the Board of Zoning Appeals for a variance to remove all of the trees, some of the trees, or one tree at a time. The county charges $250 for each variance request.

Under state law, there are four criteria that have to be met to grant a variance: there are extraordinary and exceptional conditions pertaining to the particular piece of property; these conditions do not generally apply to other property in the vicinity; because of these conditions, the application of the ordinance to the particular piece of property would effectively prohibit or unreasonably restrict the utilization of the property; and the authorization of the variance will not be of substantial detriment to adjacent property or to the public good, and the granting of the variance will not harm the character of the district.

Planning director Holly Richardson said variances can only be requested on a property once every six months.

The county’s planning commission is scheduled to discuss revisions to the tree ordinance July 15. The board deferred taking action on the revisions at meetings in May and June.

On the Waccamaw Neck, a property owner would have to get a variance from the Board of Zoning Appeals for every grand tree they want to remove, except if it was on a single-family lot.