Board votes down four-day in-school proposal 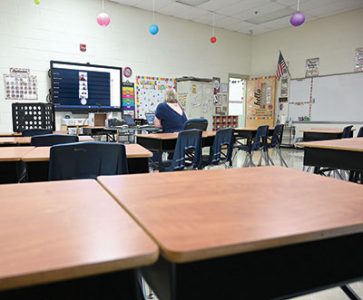 Virtual students will get the chance to move if the district moves to hybrid-plus.

A proposal to expand in-person classes for students in pre-K through fifth grade was defeated this week by the Georgetown County School Board.

Known as “hybrid-plus,” the plan was put together by the district in response to a memo from the state Department of Education urging districts to find ways to offer more in-person instruction for students in grades K-5, specific groups of students with special needs and at-risk students.

Instead of two days a week, students would be in classrooms four days a week, with school buildings continuing to be closed on Wednesdays.

Georgetown expanded the state’s proposal to include pre-K and sixth-graders at Waccamaw Intermediate School.

Board Member Pat DeLeone said she received 152 emails in the last two weeks from parents who want their children back in school five days a week.

“There’s no decision that we make at this point that doesn’t come with consequences,” Superintendent Keith Price said. “If we stick with our hybrid mode, or we were to fall back to remote, then there’s an educational cost that goes with that. If we move forward with an all in-person option, then that introduces a health factor, a health risk that goes into play.”

DeLeone, who represents District 2, made a motion that the district begin hybrid-plus on Nov. 12 if the state Department of Health and Environmental Control lists the county’s COVID-19 status as “medium.”

“I represent my district, and this is what my district wants,” DeLeone said. “That’s the reason I had to bring it to a vote.”

Only she and Board Member Sarah Elliott voted for the proposal.

“The trend was heading in the better direction, but at this point it’s not,” Cafaro said. “I don’t see any immediate need to do anything right now.”

“It looks as though our state and our nation is about to explode,” Lance said. “Things are not going to get any better. Nothing is going to happen if you look for these numbers to stabilize.”

Price said if the district eventually does move into its hybrid-plus phase, students who are enrolled in the district’s virtual program will be given the opportunity to switch to hybrid-plus.

In a recent random sampling of parents and employees, the district found that half of the parents wanted students back in school full-time as soon as possible, but half of the employees wanted to wait until next semester or when a vaccine is available, and 38 percent of employees said wait until the county’s DHEC rating returns to low.

“It does stand out that employees don’t feel as safe as parents do,” Dumm said.

The district recently unveiled a COVID-19 dashboard on its website that includes information on cases and quarantines in county schools.

“We had begun to get questions about the accuracy and the transparency of our reporting based on DHEC reports and what we were sending out,” Price said. “When we saw the lag and the discrepancies in our up-to-date reports and what was online, it was causing confusion. That’s the last thing that we need right now.”

The dashboard numbers come from daily reports the district gets about people who have tested positive, and people who are in quarantine, whether they were in school, on a bus or at a sporting event.

“I think our district is doing a much better job with contact tracing than the White House does, or lots of other organizations,” Dumm said. “We’re extremely transparent, as far as I’m concerned.”

When students do return to in-person classes more than two days a week the “magic number” would be 15 students to  a class in elementary schools when accounting for 6 feet of social distancing, Price said.

The district is installing Plexiglas on all desks as a safety precaution. Earlier this month after the district placed a second order for Plexiglas, DHEC announced that there was an improved Plexiglas that would allow for three feet of social distancing.

“Sometimes it feels like we’re chasing a moving target,” Price said. “Here’s another example of that.”

The district’s order of the new Plexiglas is expected to arrive next month.

“Every time you turn around there’s a new study. I read one yesterday that said Plexiglas is meaningless to the whole process,” Dumm said. “But you’ve got to move forward with the best information you have at the time. And you’ve got to go where the money is letting you go.”