Bones unearthed in house construction get reburial after 15 years 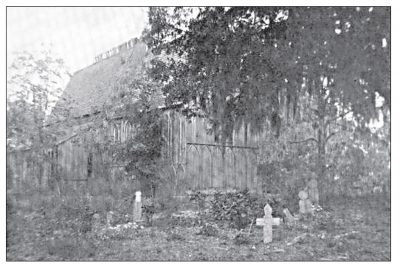 St. Mary’s Chapel, which burned in 1931, in a photo from the collection of the late Tony Devereux.

Their roots were in Africa, stretching from the Atlantic coast east across the continent toward Kenya and north to the Middle East. They worked the rice fields at Hagley Plantation, where 334 men and women were enslaved on the eve of the Civil War.

When they died, they were buried at St. Mary’s Chapel, on the bluff overlooking the Waccamaw River just south of Hagley Landing. They remained there until 2006, when construction of a home cut into the unmarked cemetery. Since then, they have been at the coroner’s offices in Richland and Georgetown counties.

On Sunday, the remains of 22 people will be reburied at a 3 p.m. service in the cemetery of Holy Cross-Faith Memorial Episcopal Church.

“It’s been a long time coming,” said Bill Stevens, a forensic anthropologist who was working on his doctorate at USC when he first examined the 303 bones in the Georgetown County Coroner’s Office in 2007. He is also a deputy coroner for Richland County.

Over the last 15 years, officials tried without success to contact descendants of those who were disinterred. Stevens and other researchers studied the DNA of the individuals to discover their origins and help locate possible descendants.

Stevens believes that the community around St. Mary’s AME Church in Pawleys Island, known as Marysville, is “a descendant community.” He and former Georgetown County Coroner Kenny Johnson identified one descendant.

“They didn’t really want to be involved,” Stevens said, even when he enlisted the help of the Gullah-Geechee Corridor Commission.

“Even I tried to call a couple and got nothing,” Johnson said. He retired as coroner in December and had hoped to have the issue resolved before then.

“We felt like these remains needed to be put to rest in a nice way,” Johnson said.

Since the bones were disturbed, institutions have come under scrutiny for their treatment of human remains kept in their collections and used for scientific studies.

“What do we do with these remains?” Stevens asked. “It’s an awkward place.”

He hopes that Sunday’s service is “a fitting memorial” that will help recognize the contribution the people made to Georgetown County. Beyond that, the DNA study will be made public to allow further research, including that of descendants who may take an interest in the future, Stevens said.

The bluff at Hagley was used as a burial site long before Plowden Weston built St. Mary’s Chapel in 1859. Weston inherited Hagley and three other plantations in the 1830s. Stevens’ research found that the remains uncovered in 2006 were likely to be from the 1840s, ’50s and ’60s. None appear to have been related.

“It all looks consistent with them being enslaved people,” he said.

The chapel burned in 1931. At the time the house was built at the site, it was thought that the cemetery had been moved in the late 1970s by the developer of Hagley Estates. Manigault Funeral Home in Georgetown was hired to do the work, and Johnson was unable to find records because it was out of business by 2006.

Evidence now shows that the grave markers were bulldozed, but the graves were never moved, Stevens said.

An archaeological report on the property in 1980 said the burial site was “recently bulldozed by an unknown party.”

When work began on the house, “construction impacted whole graves and partial graves,” he said. “It cut a big rectangle into the cemetery.”

Work didn’t stop immediately, Stevens said. When it did, the remains had been mingled.

“I wish I had been involved to collect them,” he said.

When Stevens received the bones a year later, his first task was to sort them into individuals. That led to the study of the bones to learn about the lives of those individuals.

“There were signatures of malnutrition and infectious disease,” Stevens said. “Tuberculosis was a big one.”

The evidence of a Middle Eastern connection, “could yield groundbreaking results,” Stevens wrote in a summary of the work. “Very little is known about the involvement of Middle Easterners on either the European side or the African slave trade side.”

Even from the start of his work with the Hagley remains, Stevens realized he was “a student of privilege studying the remains of enslaved Africans,” he said. “There are lots of levels to think about it.”

The reburial at Holy Cross-Faith Memorial, a predominantly Black church for most of its history, will return the remains to the area and provide closure at one level, he said.

“I wish we could have reburied them 10 years ago,” Stevens said.

Hagley residents were willing to donate property, but the county said the zoning regulations wouldn’t allow a cemetery, he said.

Johnson tried to find public property for the reburial. “We never could make it happen,” he said.

Johnson agreed that the service is an important step.

“It’s our responsibility to put them back in a place that’s suitable,” he said. “It’s historical. It’s significant. It’s part of who all of us are in Georgetown County, especially the Pawleys Island area. They had a tough, hard life. It’s important to know these people made us who we are.”

Correction: This article has been updated from the print version. While the bones were studied at the University of South Carolina’s Department of Anthropology as well as the anthopology lab at the Richland County coroner’s office, they were stored at the coroner’s offices in Richland and Georgetown counties until authorities could find an appropriate way to reinter them.