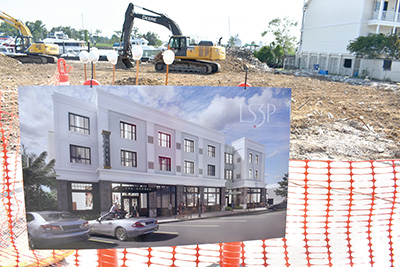 The architect’s rendering of The George at the construction site.

By the time mariners start arriving for the Wooden Boat Show in 2023, Georgetown should be home to a new boutique hotel – The George.

“This is not a project that’s just good for the investors and the developers, this is great for the city. We’re going to leave this place better than we found it,” said Christy Whitlock of Pawleys Island, a member of Winyah Hospitality, which is the general partner on the project. “It’s very rewarding all around.”

When The George opens, it will be the first time in more than 50 years that a hotel will be operating on Front Street, according to Georgetown Mayor Carol Jayroe.

“I think it’s a new day in Georgetown and just a new beginning,” Jayroe said. “It’s a much needed project.”

“We have all the natural resources already here, and then the city really came to the table,” Whitlock said. “They invested with us, they saw the vision and they captured the vision.”

Whitlock and the development group started working on a plan four years after they saw how a boutique hotel helped revitalize downtown Florence. The COVID-19 pandemic delayed, but did not derail, the plans for The George.

“It was a crazy curveball,” Whitlock said.

Joe Keenan of Palmetto Commercial Properties in Charleston, the developer on the project, said Whitlock is “the wheels behind” The George.

“She’s very persistent and she’s done a great job of bringing our team together over the last several years,” Keenan added. “We’ve had several years to get to know each other, which has been a good, and a bad, thing. It’s worked out really well.”

Despite all the setbacks and delays, Keenan said the location of the property is what everybody kept coming back to.

“What you have here … views of that gorgeous river and Winyah Bay, is phenomenal,” he added. “Highest and best use is sort of always in the back of our minds. It just screamed for a boutique hotel.”

The groundbreaking for The George was two days before a food, beer and wine festival debuted in the city. Jayroe said it is movement in the right direction.

“There’s something going on all the time and people want something to do,” she added.

The George property at the corner of Front and Queen streets used to be home to The Georgetown Times building, which was constructed in the early 1980s and demolished earlier this spring.

“The Georgetown Times was a wonderful building and it served its purpose for a long, long time,” Keenan said. “But things change.”

The hotel will have 56 rooms, space for meetings and weddings, an outdoor bar and recreation area, and a restaurant and bar run by Indigo Road Hospitality Group, which operates eateries in 11 U.S. cities, including Charleston.

“We are excited to bring new food and fun to a beautiful place with great views,” Whitlock said.

There will be no rooftop bar for now, Keenan added.

Whitlock said parking for the hotel will be in the lot next to the Chamber of Commerce’s visitors center.