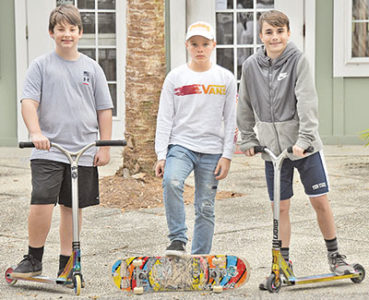 Three boys are looking for a safe place to do fakies, pops, grinds and flips.

Stowe Benston, Jayce Heenan and Truman Miller have started a campaign to build support for a skate park in the Pawleys Island area.

“A lot of the community likes skateboarding,” said Stowe, a fifth-grader at Waccamaw Intermediate School. “It would provide somewhere where kids can go and waste their energy and a place to go to do what they love, like skateboarding.”

“We all love skate parks and we all love action sports,” said Jayce, a seventh-grader at Coastal Montessori Charter School. “We all wanted the same thing so we all just got together and decided to try and get the skate park built.”

“We would always say ‘they should build a skate park in Pawleys Island because we don’t have one close to us,’” said Truman, also a seventh-grader at Coastal Montessori. “So Jayce and I called Stowe and scheduled a meeting to try to build a skate park. They wanted to so we started this.”

“The kids kind of got it going and they started going and it was hard to slow it down,” said Scott Benston, Stowe’s father and owner of Surf the Earth. “There’s really no right or wrong way to do it. … It’s great for them and it’s great for us to see that they can spearhead it.”

Benston believes Stables Park would be a natural location for the skate park.

“Tying it in at Stables Park with the Frisbee golf, all of the fields [and] the playground, you would almost tie-in something for our whole community,” Benston said. “It would really kind of make sense. … We’re a beach community. Skating and beach go hand-in-hand.”

“It’s the closest and the biggest,” Jayce said.

“There’s no real place to ride,” Truman said. “We can get kicked out of a lot of places and it’s dangerous to ride in the streets.”

The closest facility for the boys to use is Matt Hughes Skate Park in Myrtle Beach, which takes a minimum of 45 minutes to drive to.

“You have to plan for the whole day to go there,” Jayce said.

“We are such a dense area that there is no place for our children to go that is safe,” Benston said. “Some of the other areas, out at Eight Oaks, they can skateboard all around there and they’re not going to get hit. Our kids can’t even walk down the bike path without almost getting hit.”

The boys got a first-hand experience of what some people think about kids skateboarding and riding scooters in the street. While shooting a video in Litchfield Country Club to go along with their petition, someone in the neighborhood called the sheriff’s office to complain. A deputy responded, but no charges were filed.

The boys started a petition on change.org two weeks ago with the goal of getting 1,000 signatures. As of Friday, there were over 1,400.

Benston said he and the kids with be meeting with parks and recreation department officials at the end of the month. He also might take the boys to speak during the public comment period at a future County Council meeting.

Beth Goodale, director of the county’s Parks and Recreation Department, said a skate park is in the county’s long-range plan, but no timetable has been set nor has a location been chosen.

“It would be nice if went somewhere [on] the Waccamaw Neck, the congestion is getting greater and greater,” Benston said. “That’s my biggest push for this area. Not so much that another community doesn’t need it, but our kids, more than anything, are losing the safety factor of being able to do anything outside.”

Benston said skate parks usually cost about $40-45 per square foot. He plans on applying to the Tony Hawk Foundation for a grant.

“I want to make it so we can have BMXers, scooter riders and skaters in one skate park,” Truman said.
You can get more information about the project at piskateparkproject.org or sign the petition at change.org.