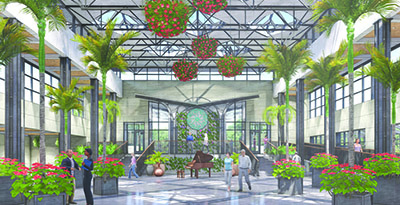 Craig Gaulden Davis An architect’s rendering of the interior of the conservatory at Brookgreen.

Brookgreen Gardens is a year and about $4 million away from starting work on a conservatory that has been part of its expansion plans for 30 years.

“Our hope is that we’ll break ground in early ’23, and it will be about an 18-month project,” said Page Kiniry, the Brookgreen president and CEO.

The 10,000-square-foot conservatory will provide an indoor space for the outdoor sculpture garden. That will allow programs that are less vulnerable to the weather.

That was the same goal identified in a master plan adopted by the Brookgreen trustees in 1988. A glass conservatory was proposed as the centerpiece of a

capital campaign launched in 1992. That effort led to the creation of the current entrance plaza anchored by a gift shop and a visitors center. The conservatory was never built.

In 2018, the trustees decided it was time to start a new capital campaign, Kiniry said. That had just started when the coronavirus pandemic arrived.

While a setback in many ways, Brookgreen remained open, and Kiniry said it made people more aware of Brookgreen’s value.

“I think a lot of people who forgot about Brookgreen were reminded in the pandemic that this is a place that’s very important to them,” she said.

The $20 million capital campaign garnered pledges of over $16 million from 50 to 60  donors.

That was the “quiet phase” of the campaign, Kiniry said. Today begins the public phase.

“This is a way that everybody can help us grow,” she said.

The conservatory is envisioned as a tropical garden that will also serve as event space in addition to space for changing exhibits.  It will have a visitors center at the front since the former center was renovated last year to create a museum-quality gallery.

The conservatory will also include a butterfly exhibit. A temporary exhibit created at the wildlife center proved popular, but aged out.

The original plan for a glass building has evolved, but it will maintain the “Brookgreen look,” Kiniry said. Because of the master plan, infrastructure is already in place.