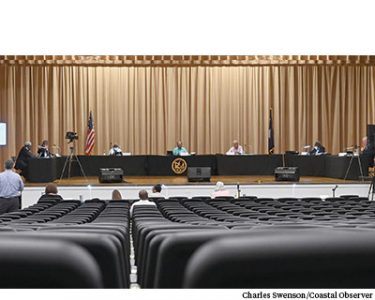 Council members met in person this week for the first time since March.

Property taxes won’t rise this year to fund Georgetown County government operations under a draft budget that is up for approval next month.

The county will draw on reserves for the third straight year to balance the general fund and sheriff’s office budgets. But Ed Kilcullen, the finance director, said the county didn’t want to raise the tax rate because of the impact of the COVID-19 outbreak on the economy.

“I think it’s the first time since 2008 that the county hasn’t used that capacity,” he said.

State law limits the ability of local governments to raise taxes to the combination of the increase in local population and the federal Consumer Price Index. For Georgetown County, that equals 2.53 percent (.72 for growth and 1.81 for the CPI).

County employees will not receive cost-of-living pay raises under the new budget, Kilcullen said. But the county faces higher costs for employee benefits, with workers compensation up 9 percent, state retirement costs up 7.3 percent and health insurance up 5.6 percent.

The proposed budget also cuts back on equipment purchases.

“Capital outlay is a victim of the COVID environment. We tried to protect positions,” Kilcullen told County Council at a workshop this week.

The county is near the end of a long-range capital improvement plan and had hoped to use a 1-cent local sales tax to fund a new round of major improvements. County Council halted that process, which would have put the tax and the improvement plan on a referendum ballot in November.

The council still has to decide how to spend about $17 million left over from a capital projects sales tax that expired in 2019. It took the first step toward spending a portion of the surplus this week, approving a spending plan by title only.

Wesley Bryant, the county attorney, said he will have an ordinance ready for the council’s June meeting that details the spending. He doesn’t expect it to use the entire surplus.

“There will still be a sizable portion,” Bryant said.

The $6 million included in the last capital projects plan to aid port dredging in Georgetown was not spent because the cost of the project soared after the referendum passed.

It will now be held in reserve for a project in the inner harbor under development through Coastal Carolina University.

Another $3 million will be set aside to complete a police and fire station in Andrews. The 2014 plan called for $1.5 million from the sales tax to be matched by state funds, but those didn’t materialize.