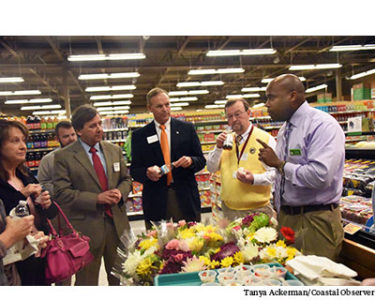 County Administrator Sel Hemingway, center, at the opening of Publix in 2015.

A proposal to create a business license to help balance Georgetown County’s budget has stirred little comment, area business groups say. County Council is due to discuss the idea at a workshop next week.

The Georgetown County Chamber of Commerce had planned to poll members after the business license was proposed last month. That hasn’t gone out yet. “I’m waiting to get more information,” Beth Stedman, the chamber CEO, said. “We have not had any calls from members.”

David Gundling, the association president, said he has heard some opposition, including one business owner who pointed out that the tax rate for commercial property is already 50 percent higher than the rate for residential property.

“I don’t know anybody who’s necessarily in favor of it,” Gundling said.

State law limits both the ability of local governments to raise property tax and the amount property values can rise during the state-mandated five-year reassessment cycle. Georgetown County had to draw on its reserves to balance its last two budgets. County Administrator Sel Hemingway, who is due to retire in December, proposed a business license and a change in the way capital projects are funded as two ways to make future county operating budgets sustainable.

A business license is estimated to raise at least $1 million a year. The shift in capital funding to a local sales tax would free up $1.6 million in local tourism taxes that are now earmarked for capital projects.

“We’ve got to have a sustainable budget,” Thomas said. The alternative to raising additional revenue is to cut services, and he added that he hasn’t heard anyone come out in favor of that option either.

County staff are waiting for a response from council members before doing more work on the business license plan. There was no discussion when it was first proposed. “We haven’t had much discussion about anything lately,” Thomas said.

“Nobody in the business community seems very enthusiastic,” Goggans said. “I can’t say I’ve heard from an overwhelming number of people.”

Stedman said there may be more response from chamber members if the council decides to move forward and more details are provided. “The process is going to be as important as the financial cost,” she said. “How many hoops are people going to have to jump through?”

Businesses that already pay for licenses in the city of Georgetown and in Horry County have told Gundling the process takes time because they have to figure out the portion of their sales that come from each jurisdiction. Some end up paying an accountant to do the work, he said.

Goggans noted that the cost to the county of administering the license also needs to be considered. “I don’t know that I have enough information to make an informed decision right now,” he said. “I do want to hear from our constituents.”

Goggans favors using a local sales tax to fund future capital projects. A capital projects sales tax approved by voters in 2014 raised $40.9 million over four years. The money was restricted to $28.2 million in projects. One of those, $6 million to help dredge the shipping channel through Winyah Bay, was dropped. The council will have to decide how to spend $16.9 million in surplus sales tax.

The capital projects sale tax expired April 30. Hemingway proposed a new list of projects be placed on the ballot in 2020 with an eight-year timeline. He estimated the tax would bring in $80 million to $85 million.

Aside from freeing up revenue for operations, Goggans said the shift to the sales tax means citizens have the chance to vote on the projects. “I think that’s a good move.”

The council is due to review its current capital projects and the sustainable budget options at a workshop Tuesday at 4 p.m.