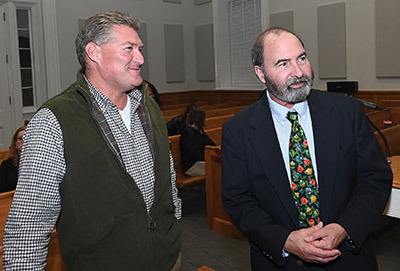 When Clint Elliott was first urged to run for the District 1 seat on Georgetown County Council that would be open at the next election, he talked with his wife, Marodith. She chairs the board of the community group Murrells Inlet 2020.

“We might be able to make a strong impact on how Georgetown County operates,” he told her.

Elliott had planned to wait until new council district lines were drawn to announce his candidacy for the seat that John Thomas plans to vacate in another year.  Instead, he made his plans public on Monday, a day before County Council announced the first drafts of the new lines.

“We know Murrells Inlet’s going to have their own representative,”  said Elliott, who will run as a Republican.

The first drafts of the proposed council districts put Elliott in District 1.

Stella Mercado, who lives in Willbrook, announced last month that she will seek the District 6 council seat currently held by Steve Goggans. He and Thomas had said they won’t seek re-election. The draft maps of the council districts also put Mercado in District 6.

Elliott grew up in the Yauhannah community in the western part of the county, about 12 miles northwest of the home in Murrells Inlet where he has lived for the last 10 years. His father, Benny, served three terms on the county school board – one as a Democrat and two as a Republican. His mother, Elaine, served as a deputy clerk of court. She ran twice for the clerk’s position – as a Democrat, then as a Republican – before she was appointed magistrate for the Pleasant Hill area.

Elliott said he was supportive of his parents in their elections, but not an active participant. His only previous run for elected office was for a seat on the S.C. Public Service Commission, whose members are elected by the legislature.

He graduated from Pleasant Hill High School and earned a degree in microbiology at Clemson University. He worked for the state Department of Health and Environmental Control before returning to the coast to run the drinking water lab for the city of Myrtle Beach. That was acquired by the Grand Strand Water and Sewer Authority and Elliott became the director of the authority’s drinking water labs.

His position gives him a perspective on a key concern along the Waccamaw Neck: flooding. The water and sewer authority draws surface water from Bull Creek between the Waccamaw and Pee Dee rivers, an area which has been the focus of area lawmakers due to flooding in Horry County.

“I hate spending money on study after study,” Elliott said, particularly since the source of the water flowing from North Carolina to the Atlantic Ocean is known.

He would like to see more done on the ways to mitigate the impacts.

“It’s a real hot-button issue right now,” Elliott said. “It’s one of those issues we’re going to have to deal with.”

Elliott lives across the street from the Hot Fish Club and is aware of the conflicting interests of residents and businesses.

“There’s only so many parking places around here” he said. “I’d love to figure some way to make more parking down here.”

He talked with Goggans this fall about the need for parking for people who want to use the Bike the Neck path. The state Department of Transportation this year put up No Parking signs at the south end of Business 17 in a place that people used as a gateway to the path.

“That’s one of the things I’d like Georgetown County to look at,” Elliott said.

High-density development brings in tax revenue, but it also strains the infrastructure and changes the character of what is primarily a single-family residential community, Elliott said. He wants to avoid “urban sprawl,” but added “there’s definitely a need for affordable housing around here.”

The same dichotomy exists with roads. County Council recently adopted an updated study of the Highway 17 corridor on the Waccamaw Neck that recommends improvements to maintain traffic flow over the next 20 years. One of those projects would reconfigure the intersection of Bypass 17 and Highway 707 with a partial cloverleaf.

“An overpass would be a better solution long-term than a cloverleaf,” said Elliott, but he isn’t enthusiastic about that alternative, which was proposed by state Sen. Stephen Goldfinch, a Murrells Inlet Republican. “It kind of ruins the quaintness.”

He thinks that the county’s focus needs to be on growth in the western part of the county.  On Waccamaw Neck, “we need to control where we’re at right now,” Elliott said.

Elliott said he would also support Sheriff Carter Weaver’s plans for adding deputies and raising deputy pay. He acknowledged that would most likely require taking funds from somewhere else in the county budget.

“You have to look at what people are asking for” when deciding what to cut, Elliott said.

Elliott attended this week’s council meeting, where he was interested in the fate of an accommodations tax grant request for $250,000 to install lights on Business 17 at Morse Park and near the Marshwalk.

The funding wasn’t recommended by the Accommodations Tax Advisory Committee. Kathi Grace, who chairs the committee, told the council “that is a lofty request for lighting” and suggested the money come from other sources.