Cat’s disappearance, like his arrival, remains a mystery to family – Coastal Observer

Cat’s disappearance, like his arrival, remains a mystery to family 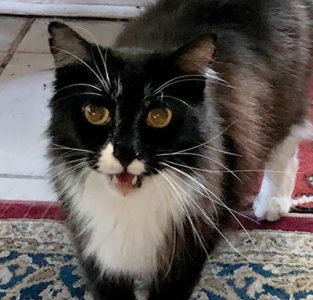 Sylvester, subject of the search.

A neighborhood has been searching for countless hours over the past two weeks for one of its beloved members; someone whose origin is just as unknown as his current whereabouts: a black cat with white patches and a clip on his ear that has been missing from Ricefields since Nov. 4.

The previous owners of the cat named Sylvester have put out missing flyers and signs in an effort to bring back the feline that has touched their hearts.

“He’s such a sweet cat. He was perfect with everything,” said Helen Hesterfer. “I don’t know where he came from. I couldn’t just leave him outside. He didn’t belong outside because of how sweet he was.”

Sylvester first appeared in the Hesterfers’ yard in October 2011 with a group of feral cats that the couple normally feeds.

“When he showed up at our house,” Hesterfrer said, “I was thinking, ‘Oh jeez. I don’t want another cat, so just go away somewhere else.’ But he didn’t.”

Sylvester would just sit in a chair in their yard, letting his long whiskers float in the wind. Those whiskers are what got him his name because he looks like Sylvester the cat from the Warner Brothers cartoons. Helen’s husband, Bob, gave him that name.

“Once he did that, I knew we were doomed,” Helen said with a smile. “If we could’ve kept him, I would’ve.”

What prevented the Hesterfers from keeping Sylvester was Bob’s allergies.

“It was either me or the cat, and I was afraid it was going to be the cat,” Bob said.

That didn’t stop them from trying, however. In January 2012, Sylvester was willing to be picked up and groomed, and after receiving exams, was neutered.

“He was perfect in all of that so we knew he was a good cat,” said Helen.

They were able to find Sylvester a companion in Jack Haugh, a Ricefields resident who was in his 80s at the time. Haugh adopted Sylvester as a Valentine’s gift for his wife, Patty.

“At the beginning, I think he was leery of men in general,” Helen said. “He was good with Patty but not so much with Jack, but then as time went on I think it was Jack that was the one.”

Linda Sacchetti and her sister Judy Groves search for Sylvester.

Patty Haugh died in 2014, and Sylvester was always at Jack Haugh’s side until his death in August.

“They were true companions,” said Judy Groves, the Haughs’ daughter. “From morning until night, my dad appeased him in every way that he demanded. Whether it be getting up at three in the morning to let him out or five in the morning, he just did everything for Sylvester. They were true friends, best friends.”

After Jack Haugh’s death, Sylvester stayed alone in the Ricefields house. Groves and her family, who live in Wachesaw, came twice a day to care for Sylvester and let him outside. Around that time, the family was looking to find someone in the neighborhood to adopt him.

They found a trial adoption for him in Litchfield Country Club, but Groves wanted him back after things didn’t work out. The day Groves went to pick up Sylvester, he was gone.

“I think as far as his whereabouts now, we have no idea,” Groves said. “But I hope people as far north as the Tradition and as far south as Hagley will be vigilant and keep their eyes open.”

“The way that we came to know Sylvester, he’s probably doing the same thing to someone else,” Bob said. “He’s probably approaching somebody looking to get fed, and he’s got the personality.”

Anyone who has information about Sylvester can call Groves at 304-838-3320. There will be a reward given for his return.