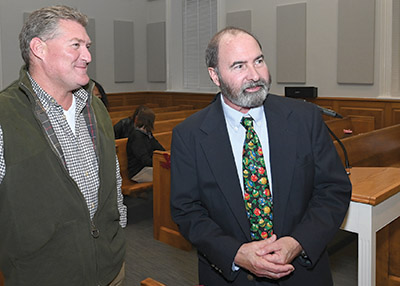 John Thomas, right, with Clint Elliott, who is unopposed to replace him on Jan. 2.

The pace of growth on the Waccamaw Neck led a County Council member to move to the mountains of North Carolina.

John Thomas resigned his District 1 seat effective May 23. The timing means that a special election won’t be needed to fill the vacancy, but it means the district won’t have a representative on council until Jan. 2.

“The things that I’ve been trying to fight won,” Thomas said. “Well, it hadn’t overwhelmed me yet, but it is so much different than when we moved here.”

He and his wife, Peg Howell, have moved to Hendersonville, N.C.  Thomas turned in his resignation last Wednesday and left for North Carolina the next morning with a U-Haul trailer packed with the last of their belongings.

“I’m going to be 69 in September, and it’s time for some peace and quiet, and that’s really the driving factor,” Thomas said in an interview before his departure.

Thomas moved to North Litchfield in 2009. He served as president of the Litchfield Beaches Property Owners Association before he was recruited by the former District 1 council member, Jerry Oakley, to run for council.

“I didn’t know what I was getting into,” Thomas said. “I think I could have had better skill sets.”

Thomas worked as a traffic engineer in Tennessee before joining the Navy, which led to a 20-year career as an intelligence analyst. He then worked in the defense industry before retiring to the Pawleys Island area, where he had vacationed as a child.

“Because I was in the intelligence community and military, the culture that I grew up in was to be non-political,” Thomas said.

Oakley and Sel Hemingway, the former county administrator and council chairman, “know how to connect with the community and know who to talk to to get things done. I could have been better at that,” Thomas said. “The sense of duty I got from the military helped me to represent my constituents fairly well, and I hope I was able to move the district and the county along a little bit – make it a little bit better.”

Thomas didn’t plan to run for re-election. He was drawn out of District 1 during redistricting this year, a process that reduced the boundaries of the district to Murrells Inlet and Garden City.

Thomas said the council has changed during his time in office.

“It is not as good a working relationship like it used to be,” he said. “That’s a tiny bit of something I’m not going to miss.”

This year, Thomas was blocked in his effort to reappoint Sandra Bundy to the Planning Commission. He was told by Council Chairman Louis Morant that other council members had raised objections to Bundy, who has criticized the lack of planning and enforcement of county regulations. It was only the second time county staff could remember the council failing defer to a member’s appointment.

He hopes that Clint Elliott, who is unopposed for the District 1 seat on the November ballot, will reappoint Bundy, who will continue to serve until replaced.

“It used to be if there was an issue in someone’s district, the other council people would defer to that district’s council person,” Thomas said. “That’s not the case anymore, and that’s frustrating.”

The frustration wasn’t the cause of his departure, but it made the decision to leave easier. “It takes some sources of stress and conflict out of my life,” he said.

“There’s really not much going on with council right now, other than a difficult budget,” Thomas said. “Which has got to happen whether I am here or not.”

The council only meets once a month over the summer.

“I think things will be, my constituents will be OK until Clint can take over,” Thomas said.

Elliott has attended council and Planning Commission meetings since announcing his run for the District 1 seat.

Council Member Bob Anderson, who represents District 2, said he will miss Thomas’ support on efforts to block zoning changes that increase residential density on the Waccamaw Neck.  But he noted that they have been in the minority on those votes.

“It’s just been diluted,” Anderson said. “It hasn’t been stopped.”

With one less vote the role of citizens in the zoning debate becomes  more important, he added.

“The citizens have got to push back,” Anderson said.

He expects to pick up some additional calls for constituent service from District 1, but said that that he routinely receives calls from people outside his district.

“I don’t mind that. I’d rather be in the middle of it,” Anderson said.