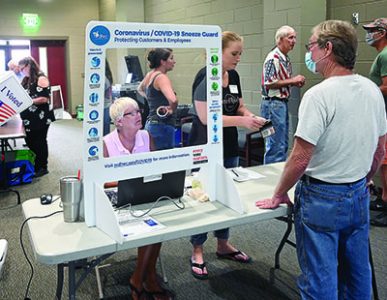 Sue Rogers checks in voters behind a plastic screen in Pawleys Island 4. Turnout was 30 percent for the primaries.

Ron Charlton will challenge this week’s GOP primary election that left him 22 votes short of winning a seventh term on Georgetown County Council. “There are a lot of unanswered questions in this thing,” he said.

Voters reported receiving ballots for the District 2 race between Charlton and Bob Anderson even though they live in other districts. Dan Stacy was among them.

Stacy lives in District 6, where Anderson served one term on council. When he voted Tuesday morning at the Pawleys Island 5 precinct at Waccamaw High, the District 2 race was on the ballot.

“I’m not supposed to be voting in this race,” he told a poll clerk. She called the county Office of Voter Registration and Elections.

Stacy didn’t vote in the race and left assuming the problem would be fixed.

“We are aware of an issue in which a few voters were given the wrong ballots,” Dean Smith, who chairs the county elections board, said Tuesday. “The problem arose due to training restrictions on in-person poll worker training caused by COVID-19.  The poll workers have now been given instruction and the situation has been rectified.  Unfortunately a voter can only vote once and that vote cannot be changed.”

But Stacy said his wife and daughter also got District 2 ballots when they voted that afternoon.

Charlton said he heard from voters in Georgetown that they didn’t get District 2 ballots when they voted at the combined Winyah Bay and Pennyroyal precincts. “One place we were on the ballot and shouldn’t have been. The other place we weren’t on the ballot,” he said. “We’re going to challenge this thing.”

Stacy represented the late Richard Kerr when he was elected to the school board in District 6 and the result was challenged by his opponent, Peggy Wheeler Cribb, because some voters in Murrells Inlet received the wrong ballot. The margin in that race was also 22 votes.

The county elections board ordered a new school board election. That decision was overturned by the state Election Commission.

In this week’s District 2 race, Anderson received 1,073 of the 2,052 votes cast. After the county election board, meeting as the Board of Canvassers, certified the result Thursday, the margin remained the same. There were eight challenged ballots from around the county added to the totals.

“Had I lost by 22, I would not have challenged it,” Anderson said.

He also got calls Tuesday about the ballot issues, including one from Stacy. He thinks some people in the Pawleys Island area were confused about which council district they live in and some may have mistaken their precinct number with the district number.

“I wouldn’t want to put people through another election cycle because I lost a few votes because of confusion. It could have gone either way,” Anderson said. “The confusion probably balanced itself out.”

Charlton has until noon Monday to file a protest with the county Republican Party. He has hired Michael Burchstead of the Columbia law firm Collins and Lacy, to represent him. Burchstead is the former attorney for the state Ethics Commission.

Anderson’s wife Karol chairs the county GOP. “I expect she would recuse herself,” Burchstead said.

Mace, who was making her first run for public office, has worked in the county auditor’s and assessor’s offices for 23 years. She said she wants to improve coordination between those offices and the treasurer’s office, which work together to maintain the tax rolls and collect taxes.

No Democrat filed for treasurer. Unless there is a successful write-in challenge in November, Mace will take office on July 1, 2021.

Chase Ridgeway, a deputy coroner, won 67 percent of the vote in the race to replace Coroner Kenny Johnson, who is retiring. He faced a challenge from Allen Morris, a Georgetown Police Department investigator.

The turnout for the party primaries was 30 percent; 7,918 voting in the GOP primary, and 5,518 voting in the Democratic primary that included a contest in Council District 3. Everett Carolina held off a challenge from former council member Leona Miller by a margin of 59 votes.

“It’s just amazing and I am so happy that that many people turned out,” said Karol Anderson.

There were about 2,000 absentee votes cast, she said. The state relaxed restrictions on absentee voting for the primary because of the coronavirus pandemic.

“We expected there to be very few people going in to vote in person, when in fact there was a good, steady stream all day,” Smith said.

Update: This story was updated following the county Board of Canvassers meeting.