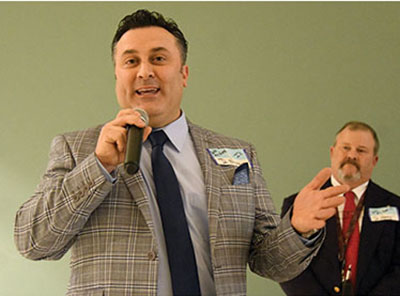 Gene Nicastro was hired as the charter school director in the spring.

One week after firing its director, the Coastal Montessori Charter School board named Rosemary Gray as interim director.

“I will work hard for you and with you,” Gray said after the announcement on Monday. She promised to continue to move the school forward.

Gray is a retired educator with 33 years of experience and is currently a real estate agent with the Litchfield Co.

Gray will lead the school’s efforts to come up with a reopening plan. Students have been learning virtually since the start of the school year.

Former director Gene Nicastro said in an email last week he was “totally surprised” by the board’s action.

He said he had “overwhelming, positive support of the staff and leadership toward the implementation of systems and processes to improve the organization.” But he added that he “recognizes that the board has the ability to move in a different direction” and wished the school “continued success in the future.”

The charter school board has given no reason for its decision.

In a statement this week, the board said it “is not going to make any further public comments about Dr. Nicastro’s confidential personnel matter.”

The board chose Gray following an executive session on Monday. After making the announcement in the school’s Grand Hall, the board members did not address the small crowd gathered at the school, nor the dozens of people watching the meeting online.

The board released a statement later that night praising Gray’s experience and saying that she will be working on a plan for returning students to the classrooms. The school has followed a virtual program since the start of the year.

“After the re-entry plan has been presented and approved, we will review leadership’s operational plans for implementation of a face-to-face instructional model. CMCS, like the district, will routinely assess (as will be outlined in the re-entry plan) which phase or model the school will operate under based on the spread of COVID-19 in our community,” the statement reads. “Please understand that our board is not requiring or insisting that CMCS return to a face-to-face instructional model, however, consistent with the state Department of Education’s requirements, it is imperative for CMCS to have a plan in place to work towards face-to-face instruction as health and safety conditions improve.”

The decision to name an interim director was postponed from last week, when a virtual meeting of the charter board drew 85 people, many of whom shouted and  talked at the same time. The board received public comment and then adjourned.

Shaye Heiskell and Sarah Wilson, who are lead teachers at the school, expressed their anger over Nicastro’s firing and how the situation was handled by the board.

“He revived our spark and trusted us and believed in us,” Heiskell said. “In an instant you all took it away. … I am hurt, offended and baffled by what has happened.”

“To see [the school] being torn apart from the inside is heartbreaking,” Wilson said. “No one has helped us through this unprecedented semester, other than Gene Nicastro.”

“We are grieving for [Nicastro] and being forced into a situation the school is not ready for,” she said.

Amy Miller, one of the founders of the school, supports an in-person option and pointed out that the private Montessori School of Pawleys Island has been offering in-person instruction for five days a week all year.

“They’re a shining example of what we can accomplish if we’re willing to do so,” Miller said. “As Montessorians, we should have been an example to the rest of the community out of the gate.”

Miller believes without an in-person option the school is unsustainable.

Robin Jones said she was “exhausted” from coming up with reasons to keep her son at Coastal Montessori.

“Wishy-washy board members and abuse is power is embarrassing,” Jones said. “This is the last thing we need right now with the uncertainties in our country.”

She called the board’s decision to fire Nicastro “sneaky and underhanded without any transparency.”

Ryan Fabbri, a former chairman of the charter school  board, said it seemed “insane” to consider sending students back into classrooms, adding that his three daughters wouldn’t return until scientists say it’s OK to do so.

He called the current board members “despicable human beings” for firing Nicastro and taking away his health insurance a few weeks before the holidays.

“What does that say about us and our leadership of the school?,” Fabbri said. “You are policy makers and you are not to run the day-to-day operations of the school.”

While the board was in executive session, Nicastro said he appreciated everybody’s support.

“For this to happen on such short notice is inhuman,” Nicastro said. “I’d be back tomorrow if given the opportunity.”

He accused some of the board members of trying to “micromanage” the school.

“That’s not the role of the board,” he said.