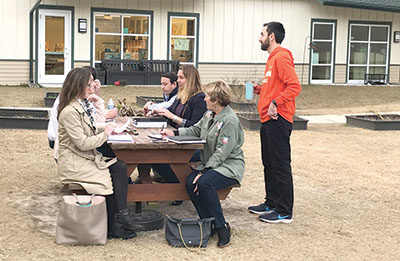 The charter board met outside the locked school Jan. 7. The school director said she wasn’t informed.

The director of Coastal Montessori Charter School resigned  in January because she felt she was being undermined by the school’s board of directors, according to internal documents.

Nathalie Hunt’s tenure as director came to a quick end during a two-week period in January.

On Jan. 9, Hunt sent a letter to the school’s board of directors expressing her concern that they were undermining her position.

The next day, she submitted her letter of resignation, effective June 30. She sent a copy to Georgetown County Schools Superintendent Randy Dozier. She also sent Dozier a copy of her Jan. 9 letter and a link to a survey the charter board asked staff to participate in on Jan. 7.

On Jan. 14, Hunt made her resignation public in the school’s newsletter. “This decision was not easy,” Hunt wrote. “I truly consider this school my first child.”

On Jan. 26, the board informed the school district that Hunt was no longer the director.

Hunt’s interactions with the board and Dozier were obtained from the school district under the state’s Freedom of Information Act.

The district sponsors Coastal Montessori, which has its own board.

The charter board has not disclosed the reason for Hunt’s departure. During a charter board meeting on Jan. 28 attended by about 30 people, chairman Ryan Fabbri said board members were shocked when Hunt wrote in the school newsletter that she was stepping down at the end of the school year.

He did say that the decision was not related to financial problems created when the district discovered it was overpaying the charter school under a formula established by state law.

Hunt was hired in 2013 as the charter school’s second director and oversaw the move from a wing in Waccamaw Middle School to its own building. Although the school is part of the county school district, it is governed by a board of directors.

In her Jan. 9 letter, Hunt objected to the staff survey, writing that it was meant to “elicit responses that put my leadership, competency, and professionalism in a false light.” She also objected to questions in the survey that she said did not apply to the business of the school, such as promotions and raises. Hunt asked to be given copies of all the surveys.

Hunt said the survey and “other recent developments” arose from violations of school policies related to chain of command, which are contained in the employee handbook. As per school policy, staff members are accountable to the director and concerns are to be handled by a supervisor or the director. If a staff member is not satisfied with the resolution of a problem, only then can they take their concerns to the board’s Problem Resolution Committee.

Hunt called this a “well founded policy” that would allow her, as director, to address issues before board members got involved.

Hunt then detailed several instances where she believed that chain of command was not followed:

• employees took their grievances to Catherine Scott after she was named board chairman in 2017;

• the board terminated an assistant director without consulting Hunt;

• before the 2018 winter break, an employee spoke to Fabbri and another board member about concerns and grievances;

• after Hunt terminated an employee on Jan. 4 with “the support of the Board Chair,” she was called into a meeting with Fabbri and Kelly Hayes, vice chairman of the board, after staff members expressed concerns to Hayes about the termination.

• on the morning of Jan. 7, the same day the survey went out, Hunt was given an agenda for a special board meeting scheduled for that evening before the school’s annual lottery. The only item on the agenda was an executive session to discuss the memorandum of agreement with the school district and personnel matters. Hunt wrote that she was not told about the meeting nor invited to be briefed after the executive session.

In fact, when the board members arrived the school doors were locked and the meeting took place at a picnic table in the school’s courtyard.

Hunt wrote that the events she described “are representative of the culture the Board is creating within the school. When staff members go to the Board with concerns and grievances before the Director, it undermines the ability of the Director to properly do her job.”

Hunt completed her letter by listing 14 goals set by former boards that she said she accomplished.

Before the meeting of Jan. 28, the board released a statement saying they had accepted Hunt’s resignation immediately. At the meeting, in response to a question about whether Hunt would continue to receive her salary, Hayes said it was a personnel matter and the board could not discuss it publicly.

According to a document received from the school district, Hunt’s salary this year was $84,860, or $7,071 per month. After adding in health insurance, retirement benefits and vacation time, Hunt’s compensation equaled $95,825.

Jessica Doll, another member of the charter school board, emailed Jon Tester, the school district’s director of human resources, on Feb. 8 asking for salary ranges for director/principal positions, and interview questions for the director role with “behavioral scoring rubrics.”

Doll had previously asked Tester for a sample of an employee grievance process/policy.

On March 4, Doll told the board they have received 12 applications for the director job, including an internal one. The next step is conduct interviews and then invite the finalists for in-person interviews at the school.