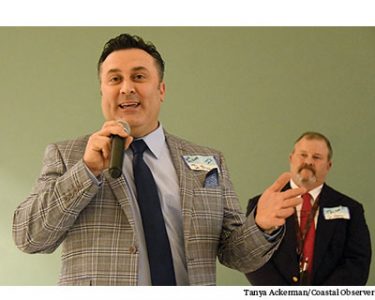 Gene Nicastro, left, was hired as the new Coastal Montessori director in the spring.

An elementary school principal from Pittsburgh will be the new director of Coastal Montessori Charter School. The charter board voted Wednesday to offer the position to Gene Nicastro.

Chip Hennecy, who has been interim director for the past year, will be the assistant director, the position he held before the resignation of Nathalie Hunt.

Nicastro will be the third director of Coastal Montessori, which opened in 2012. The first director, Lonnie Yancsurak, opened the school, then returned to California after the inaugural year. He was replaced by Hunt, who resigned in January 2019 after a dispute with the school’s board over a staff survey of her job performance.

Nicastro and Hennecy were among four finalists for the director’s position who talked about their vision for the school, the roles that parents play at the school and what keeps them up at night during a forum this week.

“Boy, I wish I had another month of summer,” Trisha Gaskill joked in response to a question about what would keep her awake the night before her first day as director. She is the school’s curriculum coordinator and lead upper elementary teacher.

Hennecy  said he worries about the school on most nights, not just before the first day.

“If it doesn’t keep you awake at night, then you’re not doing your job,” he added.

The finalists agreed about the important role parents play at the school in response to a question about opportunities beyond the school’s Parent-Teacher Organization.

Parents are “essential for a successful school,” said Nicastro, who is the principal at Richland Elementary School in the Pittsburgh suburbs. “There’s not a more impactful component than a parent. A parent is a child’s first teacher.”

Jeanette Gilliland of North Myrtle Beach has been a principal in Ohio and a principal and assistant superintendent in Pennsylvania. She would encourage parents to “celebrate learning” with their children, and host events where students do presentations on what they’ve learned.

Hennecy would like to see more parent groups in addition to the PTO.

“Everyone has something unique and of value they can contribute to the school,” he said.

The four also agreed that their vision for the school is to make the students the best they can be with input from inside and outside the building.

“I’m not going to be the guy coming from up North who says ‘here’s our new vision,’ ” Nicastro said. “It should not be my vision. It should be our vision collectively.”

Gaskins would rely on more Montessori methods, like limited testing, and recruit more students who would excel in a Montessori environment.

“I’m very passionate about those two parts of our name: Montessori and charter,” she said.

She also suggested starting a Montessori training program at the school.

One question pointed out that the Montessori method encourages tactile learning and asked for the finalists’ thoughts on the role of “screens” at the school.

Hennecy said technology is needed so students don’t fall behind and because almost every career now uses computers.

“Is technology a tool?” Nicastro asked. “Absolutely. But it’s not the tool.”

“It would be a disservice not to introduce [technology] to children,” Gilliland said, but added that she would counsel parents of young children on “internet appropriateness.”

Gaskins pointed out that the school would need to have thousands of books to equal the information that students can get on a computer.

Neither Gilliland nor Nicastro have Montessori certification.

In response to a question about what their first month as director would entail, Gilliland said she would read the operations and policy manuals, and make three-minute visits to classrooms.

“I would spend the first couple of months observing,” she said.

Nicastro said he had already read the student handbook and the school’s charter.

“I will not be sitting in my office the first two months reading policies and procedures,” he said.

After 29 years working in public schools, Hennecy called his time at Coastal Montessori a breath of fresh air.” Hennecy said he wanted to make sure everybody who works for the school is “invested” in the Montessori method. He would also like to give input on the school’s charter, which is up for renewal in 2021

“We need to prepare the school to be here when we’re gone,” Hennecy said. “When our children are gone.”

The forum was organized by the Public Charter School Alliance of South Carolina, which handled the application process for the school. The finalists were asked nine questions chosen at random from those submitted in advance by school staff and the public.

The finalists had second interviews with the charter school board on Wednesday. The board emerged that night from an executive decision to announce the offers to Nicastro and Hennecy for the 2020-21 school year. The vote was unanimous.