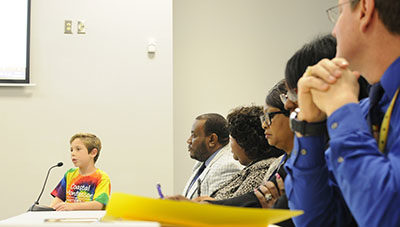 School district staff who listened to a charter student’s plea for funding in November are helping out while Coastal Montessori looks for a new director.

Coastal Montessori Charter School will get nearly $445,000 more in state and federal funds this year due to a rise in enrollment and government spending on education.

“It’s a much better situation than we found ourselves in six months ago,” said Ryan Fabbri, chairman of the charter school’s board. “Everything’s working in the right direction.”

The money should begin to be distributed to the school with the next payment from the school district, Fabbri added.

Coastal Montessori found itself in a financial crisis last year when the Georgetown County School District discovered an error in the way it calculated how much funding the school got and cut the funding by 20 percent. The school cut its operating budget and the charter board tapped into its reserves. The county school board restored $225,000 last fall and school and district officials have been meeting to come up with long-term solutions.

“An increase in enrollment is how you generate your money,” Superintendent Randy Dozier said.

Fabbri said some of the increase in funding is due to the fact that there are more low incomes students and students with special needs enrolled, and it is unclear how much more it will cost to provide services for those students.

Brent Streett, the district’s director of food service and procurement, said the funding amount could go up or down depending on the 135-day pupil count. That will come in mid-March and be audited by the state. The exact date depends on whether the district misses any more days due to bad weather.

Lindsey Anne Thompson, the school district’s attorney, dismissed rumors that the district wants to take over the school at a meeting of the county school board this week.

She said there have been questions about what will happen if Coastal Montessori defaults on the federal loan it got to construct its building. The charter board signed the loan agreement, she said, so in the case of default the building would not become property of the district.

“They operate separate and apart,” Dozier said. “We’re not under any obligation for that debt.”

“There is absolutely no chance we are going to default on the loan on the building,” Fabbri said.

The school also owns the land beneath the building, although the district bought an adjacent parcel a few years ago.

Board Member Richard Kerr said if Coastal Montessori did default the district should continue to support it as a charter school.

Charter schools are public schools and Coastal Montessori is sponsored by the district although it has its own board.

Thompson also clarified the status of the district’s involvement in the school staffing.

Hunt was hired as the charter school director in 2013. She notified the charter board on Jan. 11 that she intended to step down, and then announced in a school newsletter on Jan. 14 that this would be her last year. The board then decided to accept her resignation “effective immediately.”

Fedrick Cohen, the district’s director of curriculum and instruction, told the board that district employees have been working with the charter school at all levels, including executive directors such as Dozier, Jon Tester of human resources, Lisa Johnson of finance, Brian Clark of facilities, Michael Caviris of special services  and Genia Smith of middle school curriculum.

The district is helping in every way it can, Cohen added.

Thompson said the charter board has spoken to the district about updating its memorandum of agreement and turning over some administrative tasks to the district.

Fabbri said the agreement was written when the charter school was still housed at Waccamaw Middle School and doesn’t include anything having to do with the new building.

“We would like to come up with something a little more ironclad with the county about what services they will provide,” he said.

The school has already agreed to rejoin the district’s food program. The school was losing $700 a week by providing lunch for students from the Pawleys Island Bakery.

“They should be in good shape,” Dozier said. “I’ve been very pleased with where they are at this point and the progress they’ve made.”

“It’s not quite the dire situation we anticipated,” Thompson said.