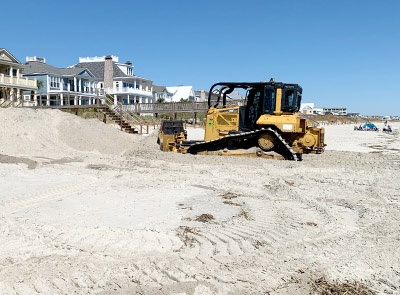 The county borrowed two bulldozers from the state Forestry Commission to build a new dune from sand scraped up from the roads at Garden City.

Hours before Hurricane Ian ravaged Garden City, a handful residents met with Georgetown County officials to share their concerns about how little of their tax dollars are spent on taking care of their area of the county.

In the days that followed, county officials and employees were out in force surveying the damage caused when the waters from the Atlantic Ocean and Murrells Inlet combined to submerge the peninsula, and  rebuilding a dune with sand scraped from South Waccamaw Drive.

The county created two staging areas for the sand removed by crews from the state Department of Transportation. One was on private property next to a damaged beach access that the owner offered to let the county use.

“That really was a blessing,” said Ray Funnye, the director of Public Services.

That meant DOT didn’t have to haul the sand as far and allowed the county to put it back on the beach, he said.

The county also contributed dump trucks to the DOT effort, which had the streets cleared earlier this week.

The sand was loaded by trackhoes into an off-road dump truck to be placed on the beach. The pace of work was so brisk the county started looking for a bulldozer to shape the berm. Its own equipment was needed at the landfill to help with storm debris.

The bulldozers will also push up sand, Funnye said.

“We’re going as far as we can” with the available sand, he said.

Along with depositing the sand, the flood waters also damaged many of Garden City’s raised beach accesses.

“Garden City is going to have a lot of rebuilding of accesses,” Goodale said.

“That’s why it’s important for us to get it done quick, get [them] safe, get [them] stabilized,” she added. “People don’t pay attention to ‘closed’ or ‘danger’. We’ve asked them to please be careful.”

Work was scheduled to start in Garden City on Wednesday. Once damage assessments were complete, the remains of the accesses were hauled away.

The community meeting was planned to update Garden City residents on projects Georgetown County is working on or has planned.

The Council District 1 seat the represented Garden City has been vacant since the resignation of John Thomas in May.

“We want to hear from you about challenges that we need to work on, so as we go forward with our plan of work, we can kind of make sure your concerns are included in that and they’re incorporated into our plan of work for the next year or years to come,” Christian said. “We don’t want you to be forgotten. We heard the concerns and we want to be responsive to them.”

Mark Lawhon, who lives on Dolphin Street and owns Marlin Quay Marina, said he’s been calling his state legislators for years about how bad the roads are and keeps being told “we’re trying.”

“We’re tired of waiting and we’re not going to wait too much longer,” Lawhon said. “All of us have the same sentiment: we’ve been neglected for too long.”

Horry County is spending $30 million to improve the streetscape along Atlantic Avenue and 1.9 miles of Waccamaw Drive in Garden City, stopping at the county line. That’s being funded with hospitality taxes.

Lawhon asked why the Georgetown County end of that road isn’t getting paved also.

“Why do we keep waiting?,” he asked. “Why are we kicking this can over 20 years down the road of not being paved.”

Hewitt said the entire length of Waccamaw Drive was approved for repaving, and the project was put out to bid, before the COVID-19 pandemic. He is trying to get an answer from the state about what happened and why the Georgetown County end is not part of the Horry County plan.

Part of the problem is that Waccamaw Drive did not rate as a Georgetown County road in most need of fixing.

Christian said it doesn’t make sense to spend more than $1 million to fix Waccamaw Drive and not address the drainage problems.

“We have had to go another route, I think, instead of the traditional ways we’ve looked at funding for these projects,” Christian said. “As we are getting extra money over and above what we normally get for the improvement of roads, we are looking at these areas that need love.”

Lawhon asked whether tourism-related revenue that is collected in Garden City could be spent only there, or whether the county could institute a penny sales tax in Garden City to fund road improvements and maintenance of beach accesses.

“There’s so much activity in this little strip of property here that we need recurring funds to maintain what we’ve got,” Lawhon said.

Christian said the county had discussions with Horry County about creating a special tax increment district for Garden City.

“There’s a lot of rules attached to it about what you could do,” she added. “We’re still very much in the preliminary stage of those conversations. But it’s certainly worthy of conversation.”

Goggans, who represents District 6, thinks the council might approve another county-wide penny sales tax within the next two years. He is not running for re-election in November.

He said South Carolina has more roads per capita of any state in the country, but has never funded them very well until four years ago, when the Legislature passed a fuel tax, which brings in between $600 and $700 million a year.

“If you drive around the state, you actually see a lot of work being done. It’s going to take them a while to catch up,” he said. “Hopefully, we’ll find ways to start funding things increasingly better as well.”

Lawhon brought up an idea that has been floating around for years that Horry County could annex Georgetown County’s portion of Garden City.

He doesn’t like the idea, but said the Horry County improvement project might restart the annexation “buzz.”

“We’ve been neglected so long. I think we’re to a point where people on this peninsula, they’re about fed up with it,” Lawhon added. “If somebody comes in with a better suggestion, or a better deal faster, the dominoes are gonna fall.”