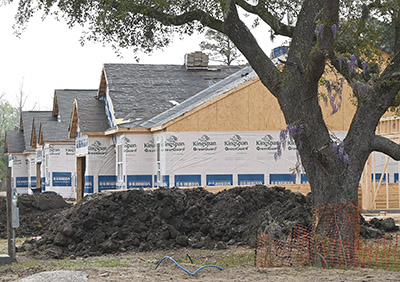 The proposal would require 50 percent of land to be open space in certain developments.

A proposal to cut density for some tracts on the Waccamaw Neck by increasing the amount of open space required in new developments is on hold while planners try to determine if there is another way to limit growth without raising the cost of housing.

“There are a lot of issues with density,” commission member Sandra Bundy said. “We’re losing our community character in a lot of locations.”

But she added that Georgetown County also needs affordable housing and moved to defer action following a public hearing last week that only drew one speaker.

At the request of County Council Member Bob Anderson, the planning staff drafted an amendment to the “general residential” zoning district that would require developments on three acres or more with at least 10 dwellings to preserve half of the land as open space. It would have to be restricted through a deed or easement to prevent future development.

“General residential” zoning allows up to 16 multi-family units per acre and single-family lots as small as 6,000 square feet. There are 38 parcels larger than three acres zoned “general residential” on Waccamaw Neck. Seven of those are over 10 acres.

Under the proposed change, a tract in Murrells Inlet that is currently being developed for 115 multi-family units would have been limited to 68 units, according to the planning staff.

“It doesn’t always automatically cut a project in half,” said Holly Richardson, the county planning director, because it might not be possible to build on all the land. Wetlands would be unbuildable, but would count toward the open space requirement.

Richardson acknowledged that reducing the number of dwellings in a development would be likely to increase their cost. She proposed that in a development where at least 20 percent of the units meet the federal limits for affordable or workforce housing, the open space requirement be reduced to 20 percent.

“That’s going to be hard to get based on housing costs today,” Richardson said. It would probably require federal and state tax credits to achieve those costs, she added.

Madison Cooper, vice president of governmental affairs for the Coastal Carolinas Association of Realtors, was the only speaker at the public hearing on the amendment. She said it was unclear whether it would serve as incentive for affordable housing or make housing less affordable.

Some commission members want the amendment to apply countywide, even though there is little “general residential” zoning outside Waccamaw Neck. Cooper said “there is no justification” for a wider application of the open space requirement because growth in the western part of the county is low.

“It might be better to create a new district for the area of concern on the Waccamaw Neck,” she said.

But Cooper also told the commission that the Realtors are concerned about property rights.

“Property ownership is a bundle of rights,” she said. Among those is “the right to economically beneficial use.”

Commission member Marla Hamby agreed that the amendment doesn’t need to apply outside the Waccamaw Neck.

“There may be other parts of the county that would like to have 16 units an acre,” she said. “You can’t say one size fits all for the whole county because it’s very diverse.”

Hamby also questioned the impact of the open space requirement on affordable housing, noting that Habitat for Humanity stopped building houses on the Waccamaw Neck years ago because of the high cost of land.

“That’s not something the county’s ever done,” Richardson said, although it is a strategy mentioned in the county’s comprehensive plan and in a study of the Highway 17 corridor on Waccamaw Neck.

“You’ve got to start somewhere,” Bundy said. “Other places are doing it effectively.”

Elizabeth Krauss, who chairs the commission, suggested the open space amendment could be deferred until the staff could provide information about other options. Those could also be the topic of a workshop, she said.

Commission member Johnny Weaver moved to recommend County Council deny the open space amendment. He pointed out that the ordinance already requires 35 percent of land to be maintained as pervious surface for stormwater management, and he questioned the impact on the owners of heirs property.

No one offered a second, so his motion failed.

Along with information about transfer of development rights, Bundy asked the staff to look at other incentives for affordable housing.

Commission member Robert Davis said he wanted information about the impact on heirs property. “You want to make sure everyone is dealt a fair hand,” he said.

And Hamby asked the staff to notify the owners of the property currently zoned “general residential” who would be affected by the open space requirement.

Anderson said this week he was surprised by the commission’s decision but agreed it was important to try to get input from the property owners. He thought the issue was being complicated by the idea that the open space requirement might apply outside the Waccamaw Neck.

“It’s time we treat the Waccamaw Neck differently than we treat the mainland,” he said. “We’re looking for ways to dampen population density on the Neck.”

The commission also recommended County Council approve a request from the owners of two parcels on Pawleys Creek to change their zoning from “residential 10,000-square-feet” to “residential one acre.”

The McMaster and Powell families were among those who opposed a request in April to change the zoning on a nearby parcel from one-acre to quarter-acre zoning. That request was later withdrawn after the commission recommended denial.

“We’re very much committed to this, to placing this restriction on our property,” John McMaster told the commission. “We could have sold it, subdivided it years ago. We chose not to.”

Cindy Person, chief counsel for Keep It Green Advocacy, represented the applicants. The citizens group generated 70 pages of comments in support of the change. They had opposed the neighbor’s request because it would have allowed an increase in density.

Person said afterward that the group has not taken a position on Anderson’s open space proposal.

“We haven’t had sufficient time to study it. That’s why we didn’t say anything at public input,” Person said. “Obviously, we like the concept of whatever we can do to decrease the density.”