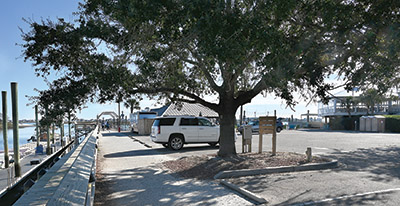 A request by a Murrells Inlet restaurant for tourism tax money to build restrooms near the Marshwalk has sparked a debate about using public funds for projects on private property.

The owners of the Wicked Tuna asked Georgetown County for $251,240 in accommodations tax funds to construct a concrete building for restrooms near the Veterans Pier to replace a set of portable toilets.

By law, the 2 percent   state tax on short-term rentals, must be used for tourism-related activities.

Steve Strickland, the owner of Earthworks, presented the plan to the county’s Accommodations Tax Advisory Committee, which reviews requests for funds and makes a recommendation to County Council.

The  restaurant currently has portable toilets  next to its building. It wants to replace those  with a prefabricated restroom made from concrete. The facilty would be the same one used by the town of Surfside Beach at its beach accesses.

Water and sewer upgrades are an authorized use for accommodations tax revenue, Strickland said.

Wicked Tuna has been working with the county for three years on a plan for restrooms, he added.

Committee member Billy Nichols said if accommodations tax money is going to be used, then the facility should be on the Marshwalk itself, not nearby.

When the plan was presented to the committee earlier this month, Strickland said the request was just seeking to return some of the funds generated by the Marshwalk to the Marshwalk.

Committee chairman Kathi Grace pointed out that because there are so few short-term rental units in Murrells Inlet, it doesn’t generate a lot of accommodations tax revenue.

Grace and committee member Lauren Joseph agreed that there is a need for public restrooms in the area.

Joseph said she couldn’t “in good faith” vote for funding unless the restaurant had a memorandum of agreement with the county that they would work together on the project.

“I think the county needs to look into a solution,” Grace said, including using the revenue from Sunday liquor license sales that is earmarked for Murrells Inlet.

“It’s a nice thing to offer to people that are out there, but it’s the public/private aspect that I think needs to be looked at a little bit more carefully,” Beth Stedman, president of the Chamber of Commerce, said after a Tourism Management Commission meeting later that day.

In the end, the committee recommended that County Council not fund the project.

The county has received about $1.5 million from the state in accommodations tax revenue this year.

Besides Wicked Tuna, 23 entities want some of the money. The requests added up to more than $2 million.

The committee recommend for funding at around 70 to 80 percent for the majority of requests. Only a handful were recommended for full funding. A few were not funded at all.

The largest amount of money – $693,769 – was recommended for the Chamber of Commerce, which conducts the marketing and advertising for the county Tourism Management Commission.

The chamber had asked for $743,500, a 24 percent increase over the 2021 request. Stedman pointed out that the increase matched the increase in tourism over last year.

The committee recommended $650,000 and then added $43,769 that was left over when all the requests had been voted on.

The sheriff’s office made the same request this year – $274,466 for four deputies – and the committee recommended $205,851, which would be enough for three.

Midway Fire and Rescue and the Murrells Inlet-Garden City Fire Department were approved for $167,433 to cover the cost of beach patrol and water rescue crews during summer.

There were five requests totaling $186,380 for the maintenance and beautification of various parts of Highway 17 and its median. Of those, only the Garden City Beach Community Association ($27,000) was fully funded. The association also received $7,000 for street lights.

Joseph pointed out that a large percentage of the county’s accommodations tax funds are generated in Garden City.

Another request that was fully funded was $88,096 for the Litchfield Beach Property Owners Association for maintenance of the beach and its accesses.

Grace said if the POA didn’t maintain the accesses county employees would have to do it.

Full funding was also recommended for:

• Georgetown Business Association, $11,000 for the beer and wine festival;

• The Village Group, $5,000 for the Tour de Plantersville and cultural festival.

Committee member Ebony Hughes suggested the association could charge a minimal fee for the skating to offset its costs.

Edie Graves said the GBA doesn’t want to charge a fee to make sure the event is “inclusive.”

The committee declined to recommend funding for three projects:

County Council will make the final decision on funding at its Dec. 13 meeting.