Consultants compile profile for next superintendent 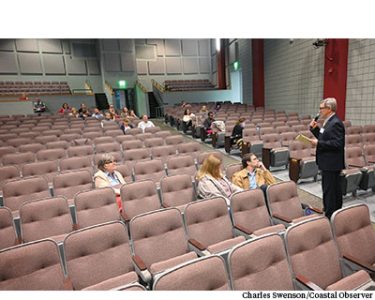 Frank Morgan leads the forum at Waccamaw High. Those who missed it can comment online.

These are some of the traits that people are looking for in the next Georgetown County superintendent of schools.

A team of consultants will give the school board a leadership profile next week based on three days of community input this week. They will also ask the board to pick a salary range for the person who will replace Superintendent Randy Dozier when he retires June 30.

Parents, grandparents, teachers, district staff, community leaders and county residents showed up at four forums this week to give input on the qualities they are looking for in the next superintendent. The forums were hosted by BWP and Associates, the Illinois firm hired by the district to conduct the search. The consultants also interviewed school board members and groups of stakeholders in the district.

“There were a lot of similarities,” said Frank Morgan, former Kershaw County school superintendent and a member of the BWP team. “Folks in Georgetown County have been very forthcoming, in a polite way.”

Morgan led the forum at Waccamaw High, where 27 people showed up, most of them school district employees. Although some people said they were disappointed by the turnout, Morgan said it was bigger than he has seen at larger districts.

BWP is also counting on input from an online survey that will be available on the district’s website, gcsd.k12.sc.us, through March 30.

“We want this to be as transparent as possible and inclusive as possible,” Morgan said.

“Every person in Georgetown County is important in the process,” said Mary Ann Blaskowitz, a  BWP associate who moderated the forum at Georgetown High School that was attended by about 30 people.

The forums revolved around three questions: what are the strengths of the county and the school district, what are some challenges, and what are the characteristics the next superintendent needs to have to continue the good things and address the challenges.

Sometimes the strengths were also a challenge.

The audience at Waccamaw High cited diversity, location and the size of the district among their list of strengths. They also said geography is a challenge. Schools are spread across a wide area and serve small populations. “Geography is a fiscal challenge,” Morgan added.

Ree Lawson, a WHS teacher, said people can live on the Waccamaw Neck and drive 30 minutes to teach in a rural school or drive 30 minutes and teach in Horry County where the pay is higher. “That really needs to be looked at,” she said.

Christy Harrelson, a parent at the Georgetown forum, said the district has a lot of outstanding and dedicated educators, but struggles to hang on to them. One factor, she believes, is a lack of support and communication “from the top down.”

“Being supportive and providing support are two different things,” Harrelson said. ”It’s a lot of talk but we don’t see as much action.”

Todd Rodenbeck, a teacher, echoed that at the Waccamaw High forum. “We want to know how we’re doing and what we’re good at,” he said. “We want feedback.”

Harrelson also wants the new superintendent to be “self-aware” and able to change things that aren’t working.

“Be confident [enough] in themselves to make the right decision, even when it’s a hard decision,” she said.

Sharon Bray, a Waccamaw teacher, said “the ability to say no” is important.

“There is no hard line in Georgetown County,” another speaker said. “The line needs to be the same.”

Tina Gilliard-Rice of Georgetown has worked for the district for 35 years. She called Dozier “personable.”

“I’ve been through a lot of superintendents,” she said. “Sometimes that was not the case.”

Gilliard-Rice would like the district to study salaries at all levels.

“Even though we think we’re in good shape here, there’s always room for improvement,” she said. “I think that the job that we do, we should be paid accordingly.”

Eileen Camasso of Litchfield Country Club, a retired superintendent from New York, came with a list of characteristics, including stamina.

The superintendent has to be “a generalist,” Morgan said. “They have to know enough about everything to answer the questions.”

The consultants expect to find that the forums and surveys will identify common themes. “I’m going to go through this and take a highlighter and highlight key words,” Morgan said.

But he will look for ideas that stand out.

Among those he heard at Waccamaw were the need for stronger performing arts in a district where music and visual arts were identified as strengths; the need to work closely with nonprofits to supplement programs; the need for the district to work with the county’s economic development program; and the dual nature of the county’s geography.

Morgan hoped that more would come through the seven-question online survey, which includes space for added comments. “I’d love to see 1,000 people take that survey this week,” he said. “I want people to get their hands on this.”