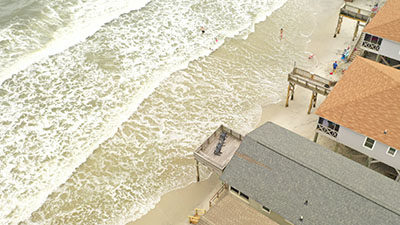 At high tide, waves reach the decks of houses on the south end of Pawleys Island.

The Army Corps of Engineers is reviewing the cost-benefit ratio of a Pawleys Island beach renourishment project, raising concern among town officials that the project will be delayed another year.

“Everything is pretty much on hold while they do it,” Town Administrator Ryan Fabbri said.

Staff at the Corps’ Charleston District is currently working on the project design and specifications in order to put it out for bids, according to a spokesman. “Concurrent with the finalization of the beach design, the Charleston District is also working to validate the benefits and costs of the project,” Sean McBride said. The validation could take up to four months to finish.

The Corps’ initial timetable called for soliciting bids this month and issuing a contract in October, which would allow work to start in November. The town worked to meet that schedule by acquiring easements from 113 beachfront property owners on 1.4 miles of the island’s south end. That portion of the island is due to get up to 840,000 cubic yards of offshore sand with the federal government paying 65 percent of the cost.

The town also plans to add sand to the beach as far north as Third Street using local and state funds.

“Everything is pushed back four months,” Fabbri said. “If we have any more setbacks, we’re looking at going through another storm season” without new sand on the beach.

Former Mayor Bill Otis, who has worked on the beach renourishment project for over 20 years, is mobilizing island property owners to contact the state’s congressional delegation to let them know they are concerned about the possible delay.

The delay is particularly frustrating because the Corps told the town a new cost-benefit analysis would be needed. “We have it in writing,” Fabbri said. “They still say, ‘you’re exempt from it.’ Why even do it?”

The call for a cost-benefit review came after revised estimates for the project rose from around $15 million to about $17 million, Fabbri said.

When the renourishment work was first approved by the Corps in 2006, is called for placing 666,400 cubic yards of sand on the south end at a cost of $8.98 million. It was projected to have a $1.60 benefit for every $1 spent. It was never funded by Congress. Corps officials said it would have a better chance of funding if the benefit was $2.50.

The benefits include protecting houses, infrastructure and public access.

While the cost of the project is nearly double 2006 estimate, Fabbri said the value of property hasn’t increased at the same rate. If the cost-benefit is a factor in Corps funding, despite agency claims to the contrary, “it can only hurt us,” Fabbri said.

A series of hurricanes starting in 2015 prompted the town to develop its own beach renourishment project without federal funding. It was prepared to issue a $12.2 million contract to put 796,000 cubic yards of sand on 2.6 miles of beach when it learned in July 2018 that the dormant Corps project was now eligible for a share of federal disaster recovery funds.

The waiver of an updated cost-benefit analysis was one of the reasons the Town Council agreed to go with the joint project. Although the town knew the federal project would be more expensive overall, the local share would be smaller and it would provide ongoing renourishment over 50 years.

Fabbri said he was told that the Corps could decide to fund the project at the original $9 million. But that would result in about half the sand that was proposed in the original project. “Is it even feasible?” he asked.

The town could also decide to do a project itself. If the Corps changes its position when the cost-benefit review is completed in September. “We’ve got the permits, we’ve got the design,” Fabbri said. “September will be a pivotal month for us.”