Cost of storm damage rises toward level for federal aid 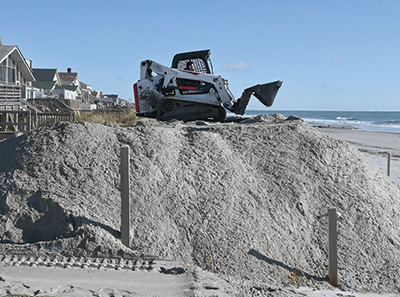 Pawleys Island plans to shape a dune from sand removed from under houses on the south end by the owners.

The cost of damage to public infrastructure from Hurricane Ian continued to grow in the weeks following landfall in Georgetown County and is now expected to pass the threshold required for federal aid.

That would reimburse local governments for the cost of cleaning up and rebuilding from the Category 1 hurricane.

The town of Pawleys Island wants to push up a new dune on 2,500 feet of beach from Pawleys Pier Village north to an area between Second and Third streets. It also needs to remove debris from the beach, including timbers from Pawleys Pier, which was cut in half by the hurricane.

Town Council delayed a vote to fund the work this week because two of the five members were absent and the two bids were $90,000 apart.

Mayor Brian Henry said he expects the council to approve the spending at a special meeting next week, and added that knowing the federal government will help cover the cost will help.

“We’ve got to get the work done, but we’d all feel better knowing that we’d be reimbursed,” he said.

The town is still unsure who is responsible for clearing debris from the marsh behind the island, where docks broke lose and debris washed from houses during the storm surge.

“That’s a very good question and one that I’m trying to get answered,” said state Rep. Lee Hewitt.

It also applies to Murrells Inlet, which is filled with debris from Garden City beach houses as well as houses along the creekfront.

“I’ve even seen furniture out in the marsh,” Hewitt said.

He has asked the state Department of Natural Resources and the Office of Ocean and Coastal Resource Management for their ideas.

Hewitt was among the officials who were warned last week not to expect that the state would reach the $9.1 million threshold in public damage required for a major disaster declaration from the Federal Emergency Management Agency. Because the hurricane made landfall on North Island, most of the damage occurred along the Waccamaw Neck.

Hewitt said he has contacted other state lawmakers to make sure their local governments report damage.

“It always tends to be a lot more than you anticipate,” he said.

The state Department of Transportation expected crews would be finished cleaning up at Garden City by the start of the week, but they were still removing debris there and from along Business 17 at midweek, Hewitt said. The agency finished work at Pawleys Island over the weekend.

“The island looks amazing from the road,” Henry said. “Obviously we’ve got some issues on the beach.”

He believes the town will be able to complete the beach scraping and cleanup for less than $100,000. That includes shaping a dune on the south end of the island from sand that washed under houses and was removed by the homeowners.

The work needs to be done to protect property from damage during future storms. Eventually, the dunes will rebuild naturally from wave and wind action, said Steven Traynum of Coastal Science and Engineering, which designed the town’s 2020 renourishment project.

The town got bids of $30,000 and $120,000 for its beach work. Administrator Dan Newquist said he was reviewing them to figure out why they were so different. He also plans to seek additional bids to present to the council next week.

The damage to public infrastructure in Georgetown County was estimated at $5.7 million, said Brandon Ellis, the county’s director of Emergency Services. That will be reviewed by the state and FEMA next week.

DOT has estimated its costs for Ian at $4.5 million.

The county estimates that damage to private structures in the county will top $53 million. That’s based on an assessment of 937 properties of which 170 had major damage that will require repairs before they become habitable again. Three houses were also destroyed by fire during the storm.

That estimate doesn’t include docks or walkways or personal property such as vehicles, Ellis said.

“Had this storm occurred before beach renourishment, the south end would have been devastated,” he said.

Hundreds of people stayed on the island during the storm, Fanning said.