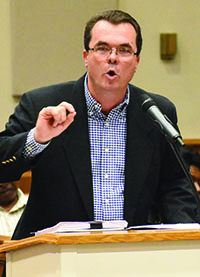 Plans for a new marina store and restaurant at Marlin Quay received final approval from Georgetown County Council this week. But the project continues to move through the courts with the marina owner seeking to overturn a Circuit Court ruling that limits the footprint of the new building.

The original building was torn down in November 2016. Mark Lawhon, the marina owner, has faced a series of challenges to his rebuilding plans from the owners of the adjacent Gulfstream Café, which shares parking within the “planned development” zoning district.

“They watched me tear this building down for two weeks,” Lawhon told County Council. “The minute the truck rolled off, they sued me to stop any construction whatsoever.”

A Circuit Court judge ruled in June that the new building could not be built outside the footprint of the old building. That followed a jury’s decision that Lawhon had interfered with an easement granted to Gulfstream to use the parking lot.

But Lawhon returned to court the next month to hear his attorney, Henrietta Golding, argue that the order draft by Gulfstream’s attorney, Adam Nugent, included language not in the judge’s original decision.

A motion to reconsider was denied and Lawhon filed a notice of appeal last month with the state Court of Appeals.

The current plan for the marina building followed last summer’s court rulings. It is the third version of the project. Dan Stacy, the attorney who represents Lawhon in the planning process, reminded County Council that each project was approved by planning staff, the Planning Commission and the council itself. Consistency is the word that sums it up, he said.

“Consistently, the opposition to this project has provided misinformation,” Stacy said. “They consistently threaten council.”

Last month, at a meeting that drew scores of workers from Gulfstream Café and other restaurants owned by the CentraArchy group, Nugent told the council they would go to court to seek damages if the project was approved. The senior member of his law firm made the same threat when an earlier version of the plan was up for approval.

George Redman, another attorney for Gulfstream, told council this week “the county is subjecting itself to liability for passing this. We have let you know that members of the community will be put in harm’s way if you allow this larger building, higher use, to be approved tonight.”

Redman also pointed out that Council Member Steve Goggans  is head of the firm that designed the project. Goggans recused himself. Redman said the dispute over the easement should be settled before the county approves a change to the Marlin Quay planned development. “Instead, the county is being asked to side with one developer for a councilman’s project against the wishes of others who simply seek to protect themselves.”

Under the easement that dates from the 1980s, Marlin Quay is supposed to have use of the parking lot by day and Gulfstream by night, Redman said. “The truth is that the Gulfstream Café uses that parking lot, all of it, every night,” he added.

“It’s all smoke and mirrors,” Lawhon told council. “They’re trying to bully me, bully you.”

“This is a David and Goliath story,” he said. “They are a massive company worth a lot of money. I grew up at a crossroads in a 12 by 52 trailer. I’ve asked nobody to give me anything.”

And he drew applause from an audience there to talk on other issues when he said that his legacy from his father was “be fair, be honest, be straightforward. That’s worth a billion dollars to me, when you can look a man in the eye and tell him the truth.”

Council approved the project without discussion.