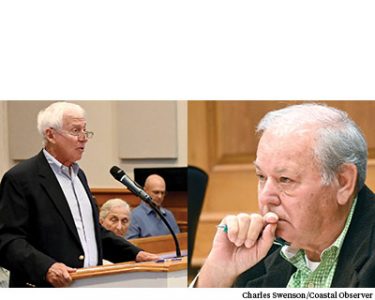 Ron Charlton spent the morning responding to emails, 65 of them, from people who wanted to know how they could help him keep the District 2 seat he has held since 1996.

Neither candidate in next month’s Republican Party primary has been campaigning in person since restrictions were imposed to help slow the coronavirus outbreak.

“I like to be there face-to-face,” Charlton said. “It’s been kind of awkward.”

Anderson served a term on County Council in District 6. After he lost a bid for re-election in 2014, he moved to a new home in Heritage Plantation, which put him in District 2. His challenge to Charlton is one of the rare council races where both candidates have to run on their record.

Charlton has had opposition in two of his six terms. He won the first time with 80 percent of the vote and the second with 70 percent. “I might not be able to beat that record with Bob,” he said.

Anderson has made over 3,500 phone calls in the last three weeks, using software that helps manage the contacts. “It’s been very interesting and very positive,” he said.  “Most people agree with my position on the Waccamaw Neck, that we need to switch gears and slow down a little bit” as far as development.

“The biggest thing I’m hearing, more than anything, is Highway 17,” Charlton said. “I hear a lot of complaints when I’m talking to people.”

Anderson hears them, too.

“The median thing’s still coming up,” he said.

Opposition to the state Department of Transportation’s plan to replace the two-way left-turn lane on Highway 17 with a raised median in the Pawleys Island business district coalesced in 2014 around Steve Goggans, who beat Anderson in the District 6 GOP primary. Opponents, originally led by Goggans, wanted County Council to halt the project.

Charlton said the addition of two traffic signals to allow U-turns and the raised median that limits left turns have created traffic tie-ups in the area. “It played out the way I thought it would,” he said. “That road issue was a big issue.”

But Anderson pointed out that Charlton was the one who voted for the median project in 2003. The vote followed a study of the Highway 17 corridor on Waccamaw Neck that proposed the raised median as an alternative to widening the road to six lanes in order to keep traffic moving.

“The fact of the matter is, the only time council ever voted on that was in 2003, when they put it on the GSATS list of things to do,” Anderson said, referring to the Grand Strand Area Transportation Study. “The vote was unanimous.”

Since the median project was decided before he was elected to council, Anderson said he didn’t expect that to be an issue. “When I ran for council, I wanted to be the fiscal hawk,” he said.

He found out that health and safety issues were a priority for constituents. Anderson is now focusing on land use.

“I plan on spending the rest of my life here. I want it to stay nice with the quality of life we’re used to,” he said.

Charlton cites his vote against a big-box retail store as part of his record for preserving the quality of life.

“I was the deciding vote for that not to come,” he said.

That was in 2005 when Lowe’s Home Improvements wanted to build a store at the South Causeway, where the unrelated Lowes Foods is now located.

“I got a lot of grief from a lot of people about not voting for Lowe’s,” Charlton said.

Both candidates agree that District 2 is diverse. It includes the southern portion of Waccamaw Neck, reaching as far north as the North Causeway, True Blue and Heritage Plantation. It also includes the Maryville and Kensington neighborhoods around Georgetown.

“On the Waccamaw Neck, you’ve got older people looking to live a quiet life,” Charlton said. “On this side of the river, you’ve got younger families looking for jobs.”

“They’re totally different areas,” Anderson said. “I want to try to build up not only the economic development, but the residential development on that side of the river.”

Because of the pandemic, both are focused on absentee voters, particularly in the wake of last week’s decision by the legislature to add the state of emergency to the list of reasons to obtaining an absentee ballot.

“We’ve been focused from the get-go on absentee voting,” Anderson said. Along with phone calls, he has mailed out letters to voters.

Anderson has raised over $13,000 toward the campaign, including $1,500 of his own funds, according to a campaign finance report filed this week with the state Ethics Commission. That included 30 individual contribution. He has spent $3,850, with $3,522 going to Swatzel Strategies, a consulting firm run by former District 1 Council Member Tom Swatzel.

Charlton had $35,000 to spend on the campaign, according his finance report filed last month. That included a $10,000 contribution and a $25,000 loan from his wife, Bonnie. The loan comes with a 3 percent interest rate. He had no outside contributions. His only expense was the $650 filing fee.

“We’ve got signs out and flyers,” Charlton said, adding that he’s telling people “talk to your neighbors. Get out and vote.”