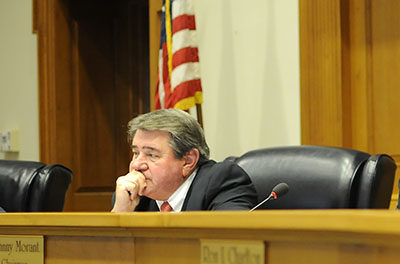 The local chapter of the NAACP filed a challenge to Beard’s voter status last week after presenting the council with documents its leaders say show that Beard lives in Georgetown rather than the Andrews address in District 5 shown on his campaign filings. The county Board of Voter Registration and Elections will hear the challenge.

It is the first such hearing the commission has held, said Donna Mahn, who became director of voter registration and elections in 2006. “We’ve never had one, so I don’t know how it will go,” she said.

Marvin Neal, the NAACP chapter president, will present his information. Beard will have the opportunity for rebuttal. “It’s not a public hearing,” Mahn said. The commission takes evidence, she added, it doesn’t investigate.

State law has a broad definition of a person’s “domicile.” It is “a fixed home where he has an intention of returning when he is absent.”

The law specifies some, but not all, the criteria used determine that intention, including mailing address, driver’s license and vehicle registration, tax returns and the residence of a spouse. The law allows spouses to have separate domiciles for voting purposes.

“At the end of it, even if the board decided that he didn’t live there, that doesn’t take him off County Council,” said Chris Whitmire, spokesman for the state Election Commission. “That would be a matter of someone going to court.”

Beard did not return calls seeking comment. He has been ill and didn’t attend last week’s council meeting where he had been expected to stand for election as chairman. John Thomas, the District 1 council member, was elected chairman.

Thomas said he hasn’t talked with Beard. “I’m basically waiting to see what Austin does,” he said. “It’s not something council can make happen one way or another.

Thomas is due to make appointments to the council’s standing committees next week. He said he has two lists: one with Beard, one without.

County Administrator Sel Hemingway agreed the situation won’t be resolved without going to court. “It’s always been clear in my mind that, contrary to what public sentiment is, council doesn’t have the ability to police this,” he said. Hemingway held the District 5 seat before taking the job as administrator. “Austin would continue to serve pending the result of the action.”

Neal acknowledged that the state law on residency is broad. “The sad part is, the ordinance that County Council is supposed to be upholding is the one he’s violating,” he said.

The county code requires council members to remain a resident of their district in order to remain on council.

“If this is allowed to happen, it tells me we are a lawless society,” Neal said.

Update: The county election commission on Friday agreed to continue the hearing until March 15. David Watson, the attorney who represents Beard, told the commission he had a medical emergency and was told by his doctor to be at the hospital in Florence by 11:30 a.m. “This is a medical necessity,” Watson said. “I’m ready to move forward, but don’t want to lose my leg.”

Thomas Tisdale, the lawyer for the NAACP, said he had no objection.