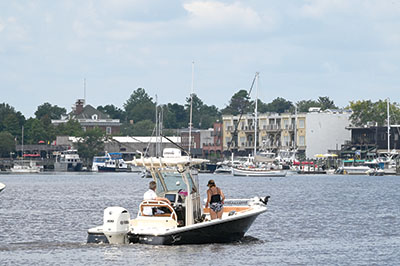 A study is looking at ways to reduce shoals in Georgetown’s inner harbor by altering the water flow.

Each of Georgetown County’s seven council districts will get $1 million worth of projects from the surplus raised by the capital surplus sales tax, under a plan presented to council members last week. Each member was asked to come up with two projects.

The council is scheduled to adopt the package of capital improvements by the end of January. The projects should be completed within two years.

Among the projects under consideration is a system that would give emergency vehicles priority at traffic signals. A citizens group has been pressing the county to adopt the technology for three years.

The funds come from the sales tax approved by voters in 2014. It was collected over four years to fund dredging in Murrells Inlet, road paving, rural fire stations and an emergency services building for the town of Andrews. The tax was estimated to raise $28.2 million.

But $6 million approved to dredge the shipping channel through Winyah Bay was never spent. That was the local contribution to what was estimated to be a $33.5 million project. After the sales tax was approved, the cost estimate was revised to $72.7 million and the project was dropped.

Along with increased collections over the four years, the county ended up with about $20 million extra when the tax expired on April 30, 2019. The allocation plan comes after a year of discussion, a change of administrators and an attempt to create another capital sales tax referendum that was thwarted by the coronavirus pandemic.

In June, the council agreed to set aside the $6 million raised for channel dredging for another Georgetown harbor project now under study. It allocated $200,000 to fund the second phase of the study.

The Andrews project got another $1.5 million after the town said bids came in above estimates.

The county also used $1.5 million to fulfill a pledge to fund the Advanced Manufacturing Center at the local Horry-Georgetown Tech campus.

The city of Georgetown got $841,353 to match a $3.4 million federal grant for a drainage project.

That left the county with $10.1 million to spend.

“I think this is great, don’t get me wrong,” Council Member Raymond Newton said when the spending formula was presented at a workshop last week.

“Council would have to agree that there is some flexibility,” Administrator Angela Christian said.

The council members agreed to be flexible.

“We would have a brand new facility like in Santee,” she said.

Council Member Steve Goggans also questioned the $1 million limit. With $2.5 million earmarked for contingencies, that would leave $600,000 of the $10.1 million surplus unaccounted for.

“I’m not complaining, but…,” Goggans said.

“It may be a couple of hundred thousand more,” Christian said.

Council Chairman John Thomas raised the possibility of funding the emergency vehicle system. The system, known as Opticom, would be placed in 76 fire trucks and ambulances and 30 traffic signals around the county, under a plan presented to the council last year. The plan called for it to be paid for and maintained over 10 years at $143,704 a year.

“That would be within the boundaries of what we could spend that money on,” Thomas said. “Be thinking about it.”

The sales tax surplus plan allows council members to collaborate between districts as long as they don’t exceed the $1 million district limit.

The Opticom system “would be something that would benefit a large area of people,” Thomas said.

The workshop was part team-building exercise and part brainstorming session. “It’s a chance to strengthen the ties the bind us,” Christian said.

She told the council that she expects next year’s budget will be tight because of the pandemic-driven recession.

“There are opportunities that may come our way,” Christian said. “Where to we want to focus our energy.”

Council Member Everett Carolina agreed. But he added that the  service needs to be equal around the county.