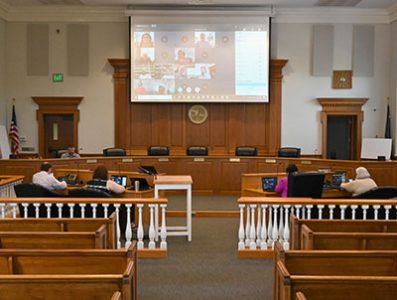 A rise in coronavirus cases will send Georgetown County Council back to virtual meetings just as the members are about to adopt procedures that will govern the form of electronic meetings.

Not everyone is happy with the change.

“I’m taking issue with that,” Council Member Bob Anderson said. “What’s the reason for doing that?”

Council Member John Thomas said he got a call from Administrator Angela Christian asking about the move. He was chairman when the council held its first virtual meeting of the pandemic last spring.

“The next six to eight weeks are going to be really bad for the virus,” Thomas said. “It’s better not to put people at risk.”

Anderson said he didn’t get a call before the county staff announced the virtual meeting plan Tuesday morning and wasn’t sure how the decision was made.

Council Member Steve Goggans said there was “informal” talk about virtual meetings last week. “I said, sure. That was the extent of it.”

Goggans added, “I have mixed feelings about it. I think we’ve been operating and meeting safely in Howard, but at the same time there’s a lot of concern out there.”

The council adopted an emergency ordinance in March 2019 that allows electronic meetings among a range of responses to the pandemic. It has renewed the ordinance every 60 days.

Last week, the council gave the second of three readings to a revised set of procedures that includes electronic meetings. That last revision was in 1999.

“It has gone through legal review several times, so I think we have addressed the major issues to make sure we are compliant,” Christian told the council.

When the council first held virtual meetings, “basically they could do it a couple of different ways. We allowed for them to be able to actually come to the courthouse, make a statement as they needed. They could also submit information to the clerk of council,” Christian said. “We are very aware that public comment is important.”

But the proposed procedures would suspend public comment during electronic meetings. People would be able to send written comments by email.

The council procedures create a 30-minute public comment period at the start of each meeting. Under the revised procedures, the time for comments is reduced from 5 to 3 minutes. If there are more than 10 speakers, the time would be reduced to fit the half-hour time frame. Also, while the current procedures recommend that people who share an opinion on a topic select a spokesperson, the revised procedures mandate one.

State law doesn’t require local governments to provide a comment period. The law does require public hearings for actions such as budgets, changes to zoning regulations and the sale of county-owned property. The proposed procedures for electronic meetings require those comments to be submitted in writing and limited to no more than 300 words. If there are more than 10 comments, the chairman is allowed to paraphrase them for the record “in order to optimize time efficiency.”

Anderson said that won’t work for him. “I want to hear from the individual,” he said.

Thomas also has concerns. “Several of us are scrambling to correct the text of the new rules and procedures,” he said.

For next week’s meeting, when the current rules will still be in effect, the county staff is working to allow public comment electronically, he added.

Anderson wants the council to revise the revision to specify when it can hold electronic meetings. “There needs to be a high standard for electronic,” he said. “Circumstances have to be extraordinarily unusual to go into that mode.”

“It needs to say virtual during a declared emergency,” Thomas said.

Goggans agreed. “It really needs to be discussed with a little more vetting,” he said.

Members of the citizens group Keep it Green, who are opposing a rezoning request to allow development of 182 apartments in Pawleys Island, told the council last week they feared it would come up for a vote at an electronic meeting when they wouldn’t be able to speak against it.

Goggans doesn’t think that will happen, since the applicant, Graycliff Capital Investors, asked for action to be deferred last week while it works on some unspecified details of the plan.

“By the time Graycliff’s ready to come back, I think we’ll be through with virtual meetings,” Goggans said, adding that he doesn’t know what changes are being made to the plan. “I would have a problem with not being able to fully debate Graycliff at a second reading.

Mary Beth Klein, a leader of Keep it Green, said she doesn’t object to virtual meetings as long as the public can get screen time for comments. “We should make technology work for us,” she said.