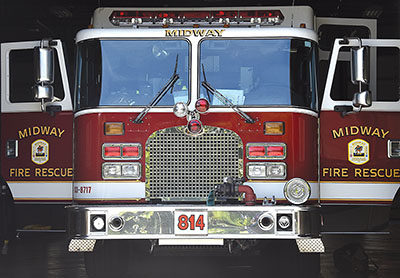 The system uses GPS devices to give emergency vehicles priority at traffic signals.

Proponents of a system that would give fire trucks and ambulances priority at traffic signals waited three months to hear from Georgetown County Council about a the plan they first pitched in March.

“We have provided you with a solution to a growing problem in our county. We have offered to meet with you regarding any questions and the system or individual facets of the program. As of this time, we have not received any official communication as to the status of the project,” Karen Yaniga, one of the organizers, told County Council last week.

The week the council replied via email. “We cannot justify acquisition of this system at this time,” Council Chairman John Thomas wrote.

“I want the response to be from the whole council, not just me,” he said in an interview before the email was sent.

Yaniga and three other Pawleys Island area residents – Tom Stickler and Gary and Pat Gadek – first presented the idea to the county two years ago. The budget had already passed, but they were promised the $650,000 concept would be reviewed by the council’s Administration and Finance committee. That never happened.

Since then, the company that sells the system, called Opticom, came up with a new financing option that would lock in an annual price over 10 years: $143,704 to cover installation and maintenance of devices for 30 traffic signals and 76 vehicles.

“A 10-year contract with no increase in annual cost would break down to a single $3 annual fee for all taxable properties in the county,” Yaniga said.

She first delivered the revised proposal after sitting through a budget workshop where council members learned it was going to be tough to balance the budget for existing services. Yaniga thought that would make the fee-based option more palatable.

Proponents have the backing of the county fire chiefs. In addition to improving the response to calls, the Opticom system is seen as a way to reduce the risk to emergency personnel when they have to negotiate an intersection where the light is red.

Yaniga also said that neighboring communities are already adopting the system so it could be possible for an ambulance to travel to Myrtle Beach or Charleston with green lights all the way.

The council questioned the effectiveness of the system. “Some of the system reports we were provided show a 7-9 second reduction in response time. Fire chiefs, when questions, say there are other issues they would rather spend $140,000 per year on,” Thomas wrote.

But the main issue is money. Thomas said this is the second year in a row that the county has drawn on reserves to help balance its operating budget. The current budget also includes one-time revenue from federal reimbursements for expenses from a series of hurricanes over the last four years.

“Everybody agreed we couldn’t fund it in the regular budget,” Thomas said in the interview.

The fee that was proposed to fund the Opticom system is “a slippery slope” for the county, he said. The council regularly gets requests for other facilities and services.

Although the system would be county-wide, there are doubts from some council members how much it would benefit the rural areas, Thomas said, noting that a recent fatal house fire in Plantersville was in an area without fire hydrants. “People like that would get no benefit from the system,” he said. “It’s a regressive tax.”

The council may consider the Opticom system as part of its capital improvement plan or as it looks for ways to spend a $17 million surplus from a capital projects sales tax. But even then, the council will be wary of anything that requires on-going operating and maintenance costs, Thomas said.

County Administrator Sel Hemingway, who plans to retire at the end of the year, is due to present the council with options of making its operating budget sustainable in the coming years. “That’s going to be a deep dive into what we can cut back on,” Thomas said, because there a few options for raising revenue.

Yaniga said she hasn’t heard any negative comments about the system and questioned the council’s claims that the fire chiefs don’t see it as a priority. “This is something they have been wanting.” As to the “slippery slope” theory of fees, “everything has to be judged on its merits,” she said.

Proponents plan to hold public meetings to explain the system and start a petition to demonstrate support to the council.