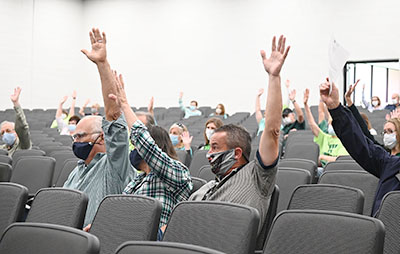 Residents show their opposition to the rezoning.

While neighbors outlined concerns about density, traffic and stormwater that would follow approval of a proposed development at Waverly and Kings River roads, leaders of a community group told County Council those details are only a distraction.

“A zoning ordinance cannot be changed without a showing of public necessity,” said Cindy Person, a leader of Keep It Green. “We don’t have to get deep into the weeds about the details of the plan or the amended plan to answer that threshold question.”

That question will now be posed to the Planning Commission, which failed to make a recommendation on the project in August. County Council voted this week to remand the request for a zoning change. It will come before the commission in October.

Waverly and Kings was initially proposed as 14 townhouses in three buildings on 3.3 acres at the intersection. The property’s current zoning would allow six single-family lots. Opposition led Bruce Watts, who designed the plan, to change it to 10 duplex units in five buildings before it came up for review by the council.

The duplexes and a single access road will will occupy 1.9 acres. The remaining 2.4 acres, which include a stormwater retention pond, will be placed in a conservation easement, Watts said.

“The environmental impact that we’re doing is a lot less than if we were to clear-cut six lots,” he said.

Keep It Green members oppose any increase in the number of units, and point to the goal in the county’s future land-use plan to limit new residential development on Waccamaw Neck.

Council Chairman John Thomas moved to deny the request to rezone the site as a “flexible design district.”

“The overriding issue on Waccamaw Neck is density,” Thomas said.

He failed to get a second.

Council Member Steve Goggans, whose district includes the property, moved to send it back to the Planning Commission. The vote  was unanimous. Catcalls followed as about 70 opponents filed out of the Howard Auditorium.

“I can’t say I’m surprised,” Person said of the decision. “It is the easy way out.”

Mary Beth Klein, another Keep It Green leader, said she appreciated Thomas’ effort, but said he missed the point.

“The zoning request is not a public necessity and should be denied on that fact alone,” Klein said.

Person, who serves on the Board of Zoning Appeals, said the law protects the right of the property owner, who can develop single-family lots, and the neighboring owners, who have the right to rely on the current zoning.

Four residents who live in Woodville Acres, across Waverly Road from the proposed access to the duplexes, told the council that traffic and flooding are already problems.

Bob Nichols said “cutting down hundreds of trees” will add to flooding.

The project will retain 87 trees and have a 40-foot buffer around the perimeter, Watts said. The building footprint will be smaller than six single-family homes.

The concept got support from Amy Armstrong, head of the S.C. Environmental Law Project, who said in an email, read by Watts, “I believe the revised plan, and especially the efforts to keep all the trees, the best thing from an environmental perspective.”

Update: This article was updated from the print edition to show that the rezoning request will come before the Planning Commission in October on remand, rather than in November.