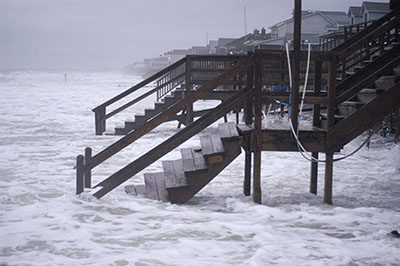 Town officials fear they will face another storm season without beach renourishment due to delays.

Pawleys Island Town Council will re-evaluate its beach renourishment project with the Army Corps of Engineers if the agency isn’t able to complete the work before the 2020 hurricane season.

The town was told the Corps would put the project out to bid this month. Instead, it is reviewing a cost-benefit study from 2004, when the project was originally developed.

“I’m very upset about it,” Mayor Jimmy Braswell said. “We’ve done everything we can do and they’re not holding up their end of the bargain.”

He has several emails from the Corps saying it would waive an update of the cost-benefit study. Administrator Ryan Fabbri said he was told by staff at the Charleston District that it would still be waived, but that the project won’t be put out to bid until the update is completed. That should be in September.

The town obtained state and federal permits last year for a beach renourishment project, but stopped short of accepting a bid for the work when the Corps of Engineers said it had funds for the 2004 project that will place offshore sand on 1.4 miles of beach on the island’s south end. The federal government will pay 65 percent of the cost and loan the town its portion of the 35 percent local match. It will also help maintain the beach following hurricanes and through ongoing renourishment for the next 50 years.

The 50-year commitment was a “big carrot” in deciding to drop the local project, Council Member Sarah Zimmerman said. But she agreed it is time to re-evaluate the Corps project.

“There is a point at which we say, ‘thanks very much, we’re going back to our plan,’ ” Council Member Rocky Holliday said. He chaired the committee that developed the local project. He proposed giving the Corps a “drop-dead date” for the beach nourishment project.

“I think that’s a great idea,” Braswell said. “They are leading us down the primrose path.”

The project that the Corps actually approved in 2006 was estimated to cost about $9 million and would have placed 666,400 cubic yards of sand on the beach.

The current project will place 840,000 cubic yards of sand at a cost of about $17 million. (The town also plans to add sand along the beach to the north as a locally-funded enhancement to the Corps project.)

The increased cost triggered the review of the cost-benefit study, Fabbri said. A cost control board within the Corps will have to approve the additional expenditure.

“What are the chances of them saying no?” Holliday asked.

Fabbri said he was told that the worst-case scenario would be the project would be funded at the original amount. But with the overall costs increasing, that would result in only half the amount of sand being placed on the beach, he noted.

“We can’t rely on them,” Holliday said.

Fabbri has already asked Coastal Science and Engineering, the firm that designed the local project, to check on the availability of dredging companies if the town decides to undertake its own project in the fall or winter.

“We could put it out for bid tomorrow,” Fabbri said. “We control our own destiny.”

While Fabbri was concerned that property values in the federal project area wouldn’t keep pace with the increased cost of renourishment, data from the Georgetown County tax assessor’s office shows they have nearly doubled from 2005 to 2019.

Fabbri provided the figures to the Corps.

“I  didn’t know what to expect,” Fabbri said. “It’s much better than I thought it would be.”

The county bases the values on real estate sales. The figures only apply to 113 oceanfront properties on the island’s south end.

Fabbri isn’t sure how the Corps will interpret the data.

“They’re not very transparent about it,” he said.