Council to vote on local beach project with former bidder 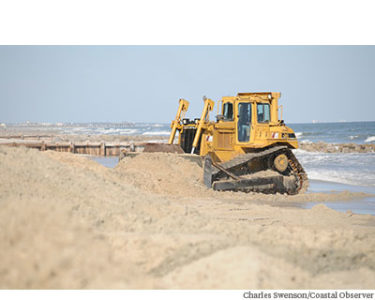 Sand is pushed up on the south end of Pawleys Island following Hurricane Matthew in 2016.

The town of Pawleys Island is poised to hire a private contractor to carry out a beach renourishment project starting in October and end its partnership with the Army Corps of Engineers. Town Council will meet Monday morning to vote on the proposal.

“I don’t envy you guys at all,” Administrator Ryan Fabbri told council members at a meeting Friday to outline the option that emerged this week. “It’s a big decision to make.”

Marinex Construction, the Charleston-based company that was prepared to renourish the beach at Pawleys Island a year ago, offered to cut its price by about $500,000 if the town wanted to accept the bid submitted in 2018 and move forward without the help of the Army Corps of Engineers. Marinex is also bidding on two projects outside the state with the deadline on one of them set for Tuesday. It wants a decision from the town before it bids on that project.

“Things have not been progressing with the Corps of Engineers as fast as promised,” Fabbri said.

The town has worked with the Corps for the last year on a project to place offshore sand on the island’s beach. The agency was scheduled to put the work out to bid this month, but that was delayed in order to update a cost-benefit analysis. Town officials were told initially that update would not be required. The Corps now says it is needed because the project’s cost estimate has almost doubled in the 15 years since it was first proposed.

“We are now, at the earliest, looking at sometime in September before that evaluation process is through,” Mayor Jimmy Braswell said. And even then, the town won’t know whether the Corps will fund the beach work at the level the town needs, he added. Braswell is concerned the town will have to go through one, and perhaps two, hurricane seasons without additional sand on the beach.

Former Mayor Bill Otis, who has continued to work on the project since stepping down in 2017, said he doubted the Corps would fund the full project, which called for placing 850,000 cubic yards of sand on 1.4 miles on the south end where public beach access allowed the town to qualify for federal funding. The cost would be $17.2 million. The The town would use $5.3 million in local and state funds to bring the total up to 1.2 million cubic yards on 2.6 miles of beach as far north as Third Street.

“The question for council is: Will they do it at all?” Council Member Rocky Holliday said. “That’s the biggest concern I have.”

Marinex was the low bidder among three firms last year. It bid $10.9 million to place 700,000 cubic yards of sand along 2.4 miles of beach. Increasing the volume to 1.1 million cubic yards raised the price to $15 million. The bid was $500,000 below its closest competitor.

Now Marinex says it will do the minimum project for $10.4 million. The cost of additional sand will be $9.25 a cubic yard rather than $10.33 in the original bid. For the larger project, the cost will  be $14.1 million. Steven Traynum, an engineer with Coastal Science and Engineering, which designed the local project, said the availability of state funds for beach renourishment makes the town’s cost for sand about $5.50 a cubic yard, about a third of the cost in recent Corps projects.

A week before the town was scheduled to accept the Marinex bid in July 2018, the Corps announced that there was funding in the federal budget to conduct the beach renourishment project the agency had approved in 2006. That project called for placing 666,400 cubic yards along 1.4 miles of beach at the south end of the island at a cost of $8.98 million. The cost estimate was based on a 2004 feasibility study.

The Corps will fund 65 percent of the work on the 1.4 mile southern section. The town and the state will share the balance with the town borrowing its portion from the Corps.

The town has to agree to fund half the cost of future renourishment to maintain the beach in the federal project area. That work will be done every 10 years.

“It’s not an easy choice,” Holliday said. “By walking away from that opportunity we’re going to lose a lot of money.” But he added that the Corps funding is uncertain and so is the start date.

The council will meet Monday at 9 a.m. to make a decision.