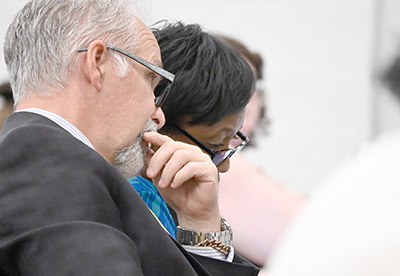 Georgetown County Council is expected to learn next week the outcome of its vote last week on a rezoning request that drew opposition from Waccamaw Neck residents. At issue is whether the decision of one member to abstain prevented the council from having the majority needed to approve the request.

County attorney Jay Watson is researching the council vote on the third reading of an ordinance to change the future land-use map from low density to medium density for 14.8 acres off Highway 17 near Waterford Road. It was 3-2 in favor of the change, but Council Member Everett Carolina abstained.

The council’s rules of procedure require a vote from “a majority of the members present” in order to pass an ordinance.

“The issue with the attorney is what counts as a majority,” Carolina said this week.

Although he voted in favor of the change – and a companion ordinance that changes the zoning on the property from “residential half-acre” to “residential 10,000 square feet” –  at a meeting in August, Carolina decided that he needed more information about the request.

“I just wanted it to be better thought through,” he said this week.

Carolina said he wasn’t aware that by abstaining he would put the result of the vote in doubt.

Neither was Council Member Bob Anderson, who opposed the request.

“I was not excited about winning that way,” he said, although he added that he isn’t certain that he won. “It’s still up in the air.”

Council Member John Thomas joined Anderson in opposing the change. When Watson told council after the vote that the measures had passed “I assumed it was a good vote,” he said. “I haven’t heard anything different.”

But the citizens group Keep It Green, which also opposed the zoning change, also noted that the decision was at odds with the council’s rules of procedure. Cindy Person, who chairs the group, said she was glad to know Watson is reviewing the vote.

“Regardless of whether or not Mr. Carolina’s abstention counted as a vote cast, he does count as a member present,” Person said. “Accordingly, three votes out of six members present does not constitute a majority and the effect is that the ordinances were not adopted.”

Watson’s initial decision was based on model rules created by the S.C. Association of Counties. Those require a majority of “members present and voting” to pass an ordinance.

Josh Rhodes, general counsel for the association, said that language is more common. He said the question posed by the council’s vote was unusual and did not want to offer a legal opinion. But he did say that abstentions are “pretty common.”

The county rules and the association model rules each rely on Robert’s Rules of Order. They say that an abstention is not a vote. But in the case where a body’s rules call for a majority of members present, “an abstention will have the same effect as a ‘no’ vote, according to Robert’s Rules.