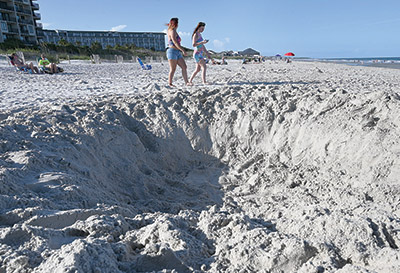 A hole at Litchfield by the Sea, which vacationers said was deep enough to strike water as it was being dug.

A favorite pastime for some beachgoers is digging holes in the sand. But holes that are not filled in can be a danger to turtles and humans.

“Nothing gets done with these holes that are dug on a daily basis,” Nancy Crawford, a Hagley resident, recently told County Council. “Until somebody gets killed, or a collapse happens to kids that are put into these holes because people don’t use common sense to know that sand is going to fall in on a person, nothing’s going to change.”

Officials said the county is now looking at ways to address the problem.

Crawford, who walks Litchfield Beach as a volunteer S.C. United Turtle Enthusiasts, urged the county to follow the lead of Myrtle Beach. A new city ordinance prohibits holes deeper than two feet and the use of metal shovels for recreational digging. It requires that all holes be filled before the digger leaves the beach.

“I think that’s a great ordinance,” said Betsy Brabson, who leads the SCUTE volunteers at DeBordieu, where holes on the beach have been a problem for years.

“It’s like the goal is to make it as big and as deep and sometimes put a child in it, which is so dangerous,” Brabson said.

Crawford said last summer she found a hole at Litchfield so big a Mini Cooper would fit in it. The renter whose family was responsible for the hole refused to fill it in.

“They actually had seats cut out inside of that hole, that’s how big it was,” Crawford said. “It was a joke for the guy renting the property that every day he was going to make it bigger.”

SCUTE contacted the sheriff’s office, who said they couldn’t do anything because the county does not have an ordinance prohibiting holes on the beach.

“I have no legal authority. I can’t tell them to stop,” Sgt. Chuck Weaver, head of the beach patrol, said.

About half the people he talks with about digging holes understand the concern and fill them in, he said.

“Residents definitely walk the beach at night and are very concerned,” Cindy Kerr, president of the Litchfield Beaches Property Owners Association, said. “You turn the lights out for the turtles and everyone’s got a smart phone that’s got a flashlight on it, but even so, if you’re not paying attention some of those holes are super deep.”

After the council meeting, Crawford spoke with Beth Goodale, director of the county’s Parks and Recreation Department, which oversees the county’s beaches. Crawford said Goodale told her she was working on an ordinance.

County Council Member John Thomas said he is not aware of any “official effort to try to police hole digging.” He said a new ordinance would be hard to enforce.

Brabson said when her volunteers find a hole she calls DeBordieu security and they send out a maintenance person to fill it in.  “We would rather whoever dug it fill it in,” she added.

Mary Schneider, who leads SCUTE volunteers on Pawleys Island, said holes are not a big problem there because so many people return year after year and know not to dig.

“We really do have a lot of cooperation,” she said.

Thomas and his wife, Peg Howell, used to be SCUTE volunteers and walk the beach. In 2013, they found a hole that looked like a swimming pool.

“It had two different levels and it was coated with a plastic sheet,” Thomas said. “It took us a long time to get the plastic out and then we filled in the hole. That was the most amazing one to me.”