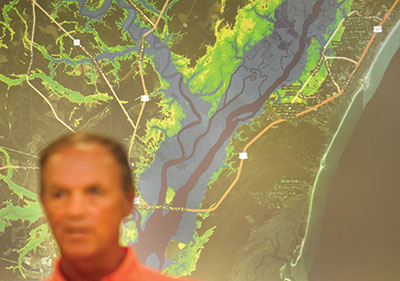 A map showing extreme conditions serves as the backdrop for a press conference on the flood.

Georgetown County officials believe flooding will not reach the extremes initially forecast as the rain that fell across the Carolinas during Hurricane Florence last week makes its way down the rivers.

Administrator Sel Hemingway said Wednesday that the water flowing through the Waccamaw River is moving slower than first expected and it spreading out as it moves from the forested wetlands in Horry County to the broad tidal marshes in Georgetown County. But even at reduced levels, the water is expected to flood areas where flooding has not been seen in past storms, and Hemingway renewed calls for residents to be vigilant.

No evacuation order will go out for neighborhoods along the Waccamaw Neck that face flooding. But residents may get a phone call or text message.

“There will not be an official evacuation order,” Hemingway said earlier this week. “The most important message that I can convey at this time is that you need to prepare to leave if you live in these areas.”

A flood model prepared by the state Department of Natural Resources shows the potential for water to rise 10 feet or more over land along the Waccamaw River and its tidal creeks. The water draining through the Waccamaw and Pee Dee River basins is at or above historic levels. The Waccamaw was expected to crest in Conway at 4 feet above the record set during Hurricane Matthew in 2016, according to the National Weather Service.

But Hemingway pointed out that the flooding from Matthew can’t be compared to the current circumstance. This time, the Pee Dee River that runs west of the Waccamaw is close to record levels last seen in 1945, according to the U.S. Geological Survey.

“The Pee Dee is the 800-pound gorilla in the room,” Hemingway said.

“The Pee Dee is the dominant river,” said Keith Duffy, a hydraulics and hydrology engineer for the Army Corps of Engineers district in Portland, Ore. He spent last week working with Georgetown County emergency management officials. “The analogy is, when they come together, the Pee Dee actually has the right of way. The Waccamaw would be held back somewhat.”

Forecasts of when the rivers will crest in different locations change regularly. The state Department of Transportation was installing flood barriers along Highway 17 at the Waccamaw and Pee Dee river bridges. The agency expected flooding to start Wednesday night and into Thursday morning.

“This area is very hard to predict because of the width of the floodplain and the number of rivers that are coming in just upstream,” said Leland Colvin, the deputy secretary of engineering at DOT.

The agency is also basing decisions on the worst-case model developed by DNR. Duffy explained that the map was “a snapshot of the maximum, the crest.” It has changed since it was first released last week. Duffy the model should become more accurate as the water gets closer.

That is also true of estimates about the duration of the flooding. “It’s been staying at high stages for awhile. We’re still fine tuning the duration. When we get closer, we will have a better estimate,” Duffy said.

He returned this week to Portland. Hemingway had hoped to convince the Corps of Engineers to let Duffy stay in the county to help with its decision-making and provide some recommendations for long-term monitoring.

Instead, Hemingway said the county has been watching the water gauges and relying on local knowledge of conditions to try to interpret data coming from the state. That led to Wednesday’s announcement.

The Waccamaw River is influenced by the tide along the length of the Waccamaw Neck. At the Geological Survey’s gauge at Heritage Plantation the tidal range is between 3 and 4 feet. That is factored into the flood models. “Because there is so much water in the river, it’s almost acting like a river above the tide all the way to the bay,” Duffy said.

For all the modeling, preparations and evidence of flooding upstream, there were still people unaware of the disaster making its way down the river, said Sam Hodge, the county emergency manager.

“We still get phone calls from people who have no idea what’s going on. We’ve been at this a couple of weeks now. We’re kind of – I hate to use the word – numb to it, but we live this every single day, and for someone in Georgetown not to realize what is going on around them really bothers me,” he said.

It’s important for people to look out for their neighbors to make sure they are aware, Hodge said. “Our job is to help you be better prepared, but it’s your job to take care of you, your family and your neighbors,” he said. One reason there will be no evacuation order is that the flood is slow moving and will affect different areas at different times, Hemingway said. That’s why people need to be aware of conditions around them.

“You may not sense that you have an issue with immediate flooding,” Hemingway said, but areas could become isolated from supplies and emergency services even if their property isn’t actually covered by water.

A shelter opened Monday at Waccamaw Middle School. “We are prepared to open additional shelters should the need arise,” Hemingway said. Initial estimates were that 6,000 to 8,000 people in the county could be affected by the flooding. For those on Waccamaw Neck, “there are opportunities to move away from the danger as close as Highway 17 itself,” Hemingway said. Flooding is not forecast to reach the highway anywhere except near the Waccamaw River bridge.

Real estate companies have offered special rates on vacation properties to people displaced by the flood. Businesses have offered their parking lots for people who want to move vehicles away from flood zones. “There’s a lot of generosity being offered,” Hemingway said.

In addition to the National Guard, there are another 230 law enforcement officers from other agencies in Georgetown County. Sheriff Lane Cribb said he hoped that would make it easier for people to make the decision to leave homes threatened by flooding without fear about looters. “We have a lot of extra eyes right now,” he said. Many of those units were out Tuesday as the rising water began to cross over roads in neighborhoods along the river. Colvin said DOT has a supply of barriers in place to block off roads that become unsafe to travel because of high water. All of the first responders have access to them, he said.

Georgetown Mayor Brendon Barber said police will ticket people who try to cross the barriers. Cribb said he didn’t envision doing that in the county. But he pointed to the danger of trying to drive through floodwater, particularly if you can’t see the road surface. “The water may not look strong, but it is strong,” he said.