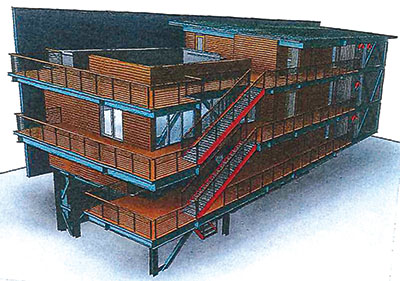 A rendering of the marina store and restaurant at Marlin Quay.

Three years after Georgetown County Council first approved a zoning change to allow construction of a marina store and restaurant at Marlin Quay Marina, one neighbor is still trying to find out what the council members were thinking.

The amendment to the “planned development” zoning prompted three lawsuits in Circuit Court by the owners of the Gulfstream Café, two involving the owners of the marina and the third claiming that County Council erred in approving the zoning change.

Appeals in the two cases involving the marina owner, Mark Lawhon and Palmetto Industrial Development, are pending before the state Court of Appeals.

Attorneys for Gulfstream began taking depositions this month from the council members, but stopped when the county’s attorneys objected to the line of questioning. The county’s attorneys, Henrietta Golding and Brooke Watson from the firm of Burr & Forman, want the court to rule that the decision-making process used by the council members is subject to “legislative privilege.”

According to court filings, Gulfstream had asked Council Member John Thomas, the first of the seven members to be deposed, about the way he considered changes to the zoning ordinance. He was asked about “the first step” he takes, how often he reviews the ordinance, what discussion he has with planning staff and other council members and what factors he considers before casting a vote on a zoning change.

He was also asked about his understanding of the issues in the Marlin Quay rezoning request.

The marina owners demolished an existing store and restaurant – which Gulfstream has characterized as a snack bar – in November 2016. Gulfstream then challenged a series of county approvals for the new facility. At issue is an easement that allows the restaurant to use the parking lot at Marlin Quay. It says that the expansion of the restaurant at Marlin Quay will increase parking problems and reduce the value of Gulfstream’s property.

Depositions were scheduled March 1 and 2 with Thomas, Council Members Louis Morant and Lillie Jean Johnson, and Austin Beard and Ron Charlton, who are no longer on the council.

“Due to the objections by Defendants’ counsel on the grounds of legislative privilege, the Parties agreed to suspend the deposition of Thomas, as well as postpone the depositions of the remaining Council members until the Court makes a determination,” the county’s attorneys said in a filing. “The Supreme Court of the United States, as well as South Carolina courts, have recognized that inquiries into legislator’s motives are not proper.”

They cited a state Appeals Court decision in a Greenville County zoning dispute that said, “We are aware of no authority allowing someone challenging action by Council to interrogate members individually to impeach Council’s decision. The governing body of a municipality acts as a collective body, not as individuals, and decisions made in this fashion are the product of debate and compromise. If individuals are not satisfied with decisions made by members of a municipal government within the limits of the law, their remedy is at the polls, not the courts.”

Although the phrase “legislative privilege” isn’t used in that case or others cited by the county, its attorneys said, those decisions “illustrate the strong stance in South Carolina that local legislators cannot be deposed individually to gain information on those legislators’ motives, intent, and actions related to legislative matters or for actions taken by the local governing body as a whole.”

The county attorneys argued that Gulfstream should not be allowed to depose the council members, but said that if allowed, the questions should not violate legislative privilege.

“There are overarching public policy considerations,” the county attorneys said.

They cite a U.S. Supreme Court decision in a 1997 case from Massachusetts that extended the legislative privilege of federal and state lawmakers to local officials.

“Regardless of the level of government, the exercise of legislative discretion should not be inhibited by judicial interference or distorted by the fear of personal liability,” Justice Clarence Thomas wrote for the unanimous court. “Furthermore, the time and energy required to defend against a lawsuit are of particular concern at the local level, where the part-time citizen-legislator remains commonplace. And the threat of liability m2ay significantly deter service in local government, where prestige and pecuniary rewards may pale in comparison to the threat of civil liability.”

The questions from Gulfstream’s attorneys were improper because they related to his role as a council member, the county attorneys argued.

“Plaintiff aims to interrogate members individually to impeach the County Council’s decision as evidenced by the questions posed during Thomas’ brief deposition,” they said in a filing.