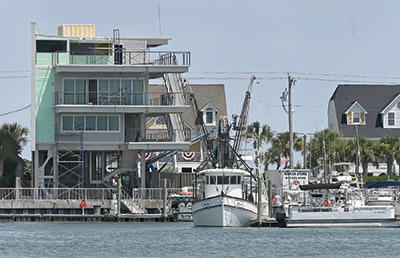 The new restaurant and shop under construction at Marlin Quay Marina.

A Circuit Court judge last week denied Georgetown County’s bid to end a lawsuit over a zoning change that allowed construction of a new shop and restaurant at Marlin Quay Marina.

The owner of the adjacent Gulfstream Café, which has challenged the project in court since 2016, also rejected the county’s offer of $145,000 to settle the suit.

“He would consider a settlement in which the County constructs a parking deck on the parking lot or limits the hours of operation of MQ 3.0 to daytime only,” Adam Nugent, an attorney for Gulfstream, said in an email referring to the third version of the Marlin Quay project.

County Council Member John Thomas, whose district includes the marina, said there has been no discussion about a parking facility or a time restriction.

Henrietta Golding, the attorney for Georgetown County, argued at a hearing last month that Gulfstream’s suit seeking to overturn the zoning change to the Marlin Quay “planned development” should be dismissed because the restaurant failed to file a timely appeal.

But with the case scheduled for trial on Feb. 14, one of those attorneys has left the firm and another was scheduled to have surgery today. Gulfstream asked the court for a one-month continuance.

Gulfstream filed suit after the new owner of the marina, Mark Lawhon, tore down the old restaurant and shop in November 2016. Gulfstream claims that the marina plan violates easements that allow it to use the shared parking lot. Two suits between the restaurant and the marina are pending in the state Court of Appeals.

Georgetown County Council approved Lawhon’s plan for a new restaurant and shop in February 2018. That was version 2.0. Gulfstream objected at public hearings, but didn’t appeal that decision to the court. In June 2018, the judge in one of the suits filed by Gulfstream against Lawhon and his company, Palmetto Industrial Development, ruled that any new building had to be built in the footprint of the old building.

The Marlin Quay planned development was amended again to comply with the court’s decision. Gulfstream appealed the county’s approval of what is known as version 3.0.

Gulfstream argues that the county violated state law and its own procedures in approving Marlin Quay 3.0. It says it had no obligation to appeal version 2.0 and that when the planned development was changed again a new window opened for an appeal.

The county’s argument “is nowhere to be found in the law,” Simon Bloom, a principal in the law firm that represents Gulfstream, said at the hearing.

Bloom had a “medical emergency” and was scheduled to have surgery today, according to court filings.

“Mr. Bloom will be immobile and unable to prepare for or conduct a week-long jury trial,” a filing states.

In addition, Nugent, who worked for Bloom’s firm, left on Jan. 21 to take a job with the U.S. Attorney’s Office.

Golding asked the county to let the case go to trial on schedule.

She noted in a filing this week that it was Gulfstream that filed the motion last November that led the court to set the Feb. 14 trial date.

In addition, Bloom only became actively involved in the case at the January hearing, where he followed the argument of Andrea Pearson, a lawyer in his firm, to provide additional information, Golding said.

She also pointed out that there was no medical reason provided to show why Bloom could not have scheduled his surgery after the trail.

Golding also asked the court to keep Nugent as one of Gulfstream’s attorneys.

In the email rejecting the county’s settlement offer, Nugent told Golding that “we are prepared to go forward with the trial.”

“He has, in actuality, been the lead counsel in this civil action. He knows this case in its entirety and he is an experienced trial lawyer and can handle the trial if, in fact, Simon Bloom decides to proceed with his surgery,” Golding said.