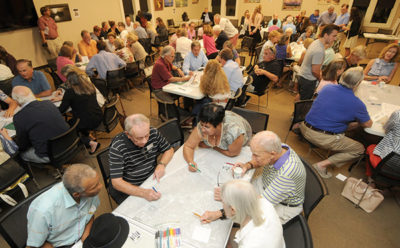 Residents draw their goals for the area’s future on maps during a workshop in 2017.

The firm that designed the raised median along Highway 17 in the Pawleys Island business district will conduct a review of land use along the highway corridor on Waccamaw Neck. A $200,000 contract with Stantec was approved by County Council last month.
The land use review will be done at the same time as a $100,000 update of a 2003 corridor study that its being funded by the Grand Strand Area Transportation Study. Stantec conducted that study, but didn’t bid on the update because of controversy surrounding the median project. “They thought there might be some backlash,” Mark Hoeweler, the executive director of GSATS, said.
The raised median replaced a two-way left-turn lane along 1.8 miles of highway and drew opposition from some business owners that it would restrict access by their customers. The project, completed in 2015, added two traffic lights, which were linked by computer with five other signals. It was first proposed in the 2003 corridor study as an alternative to widening Highway 17 to six lanes.
Steve Goggans was a leader of the projects opponents and later won election to County Council. He was proposed the update of the corridor study and had hoped to link it with the wider land-use study. “I admit to a little frustration,” he said. Funding for the transportation study was approved in 2015.
The corridor study will be done by AECOM. Hoeweler said he is waiting on final contract approval from the state Department of Transportation.
Goggans was surprised that Stantec won the contract for the land-use study, but said he noted that it is a large firm and that land planning and traffic planning are separate offices. “We need to get some consensus about where we want to go as a community,” he said. “They’ve seen things that work, particularly in resort communities.”
Although separate studies, the contracts call for the consultants to work together. Their results will be included in an update of the county’s land-use plan, which state law requires every 10 years.
“It’s complicated. It’s the culmination of three years” of discussion, Boyd Johnson, the county planning director, said.
All three projects will create opportunities for public comment.
He called the county-funded study, “an intensive opportunity for the public to participate. At some point they’ll have a Magic Marker in their hand” and get to draw on the land-use maps.
The overlapping efforts won’t cost more. Goggans said a complete study could cost twice as much. “I think we’re getting great fees.”