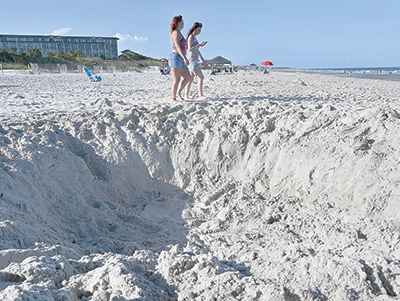 A visitor in late June dug a hole so deep in front of Litchfield by the Sea that nearby vacationers said the man struck water.

A change to Georgetown County’s beach regulations will limit the depth of holes that  people can dig on the beach. The amendment is scheduled for the second of three readings by County Council next week.

The amendment follows a request made last summer by a volunteer turtle monitor that the county adopt restrictions that mirror those in the city of Myrtle Beach and the town of Surfside Beach.

“This is not just an issue for turtles,” said Nancy Crawford, who has been a volunteer with S.C. United Turtle Enthusiasts for 12 years.

The holes pose a threat to nesting sea turtles and for their hatchlings. Crawford said she is also concerned that some of the deepest holes could collapse on the people who dig them.

She made a second request to County Council to address the issue last month in hope that the rules would be changed before the start of the summer tourist season.

The council gave first reading by title only to amend its beach regulations. Crawford was concerned that the proposed change would only limit the type of shovels people can take on the beach.

County attorney Jay Watson assured Crawford that the new rules would be comprehensive.

Watson had not completed the draft ordinance this week, but said through a spokeswoman that it includes a depth limit. That’s actually the first item listed.

Crawford said she would be satisfied if the county ordinance follows the Myrtle Beach ordinance.

Myrtle Beach prohibits the use of metal shovels for  “recreational digging.” There is an exception for events that receive special permits from the city. City employees are also exempt when on official business.

Myrtle Beach limits the depth of holes or trenches to 2 feet. It also requires that they be filled in before the person who digs them leaves the area.

Crawford said she has seen people on the beach digging with snow shovels. SCUTE volunteers try to fill in the abandoned holes but have found it hard to keep pace with the diggers.

County Council Member John Thomas, who lives at North Litchfield, said he isn’t sure the ordinance will be enforceable, but he will support it.

Sgt. Chuck Weaver, head of the county beach patrol, said last year that about half the people deputies talk to about holes fill them in voluntarily.